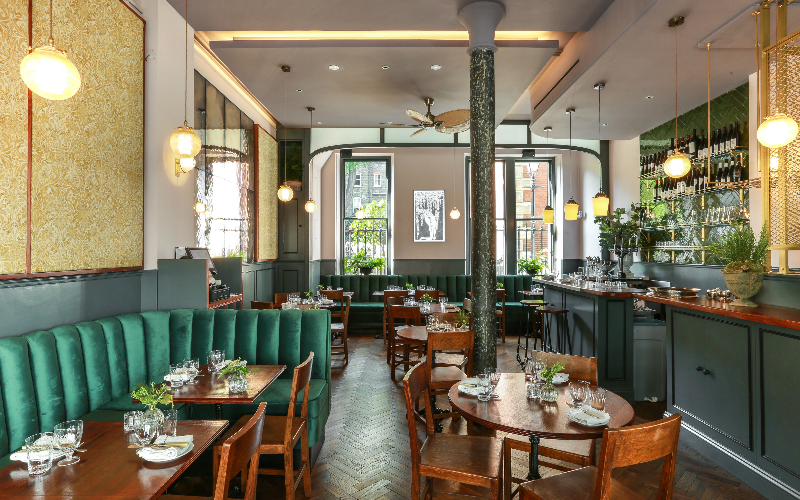 Cora Pearl, the Covent Garden sister to Mayfair’s Kitty Fisher’s, has been one of the most anticipated restaurant openings of the year and after dropping by, we totally see why. The two-floor restaurant (a brighter dining room on the ground floor and a cocktail bar and open kitchen in the basement) is named after another working girl Cora Pearl, who became a party queen in Paris, and there are nods to her glam life throughout the space, from parquet floors and velvet banquettes to vintage style glassware and trinkets in the bathrooms.

Kitty Fisher’s head chef George Barson also heads up the kitchen here and has created a menu that mixes British and French influences in homage of Cora’s life. The dishes may read as simple but don’t be fooled; this is some of the best food we’ve eaten all year. The Bloody Mary mackerel is actually a thick scorched fillet topped tomato gel and little discs of onion (and is even pre-sliced so it looks even more lovely); the cheese & ham toastie is generously stuffed with rich shredded ham hock, with a little pot of pickle on the side that blows Branston’s out of the water; and the cow’s curd agnolotti, four fat parcels on a gorgeous pea puree with shaved truffle, is pure summer on a plate.

Our highlight from the savoury dishes has to be the veal fillet; the meat is perfectly cooked medium rare and comes sat on the smoothest celeriac puree, with a jug of bordelaise sauce on the side. All three elements were faultless, and though it’s amazing as is, you will want to add a side of chips – they’ve been getting a lot of hype already and we can confirm that they are EPIC.

Happily the puds are on the same level. Milk and cookies, again just three elements – a thick creamy foam covering chunks of chocolate chip cookie and blobs of ganache – is one of those desserts that you wolf down because it tastes so good and then you wanna cry because it’s all gone. Cora Pearl is an instant hit… get down there ASAP. These guys also knock out one of the best Sunday roasts in London.