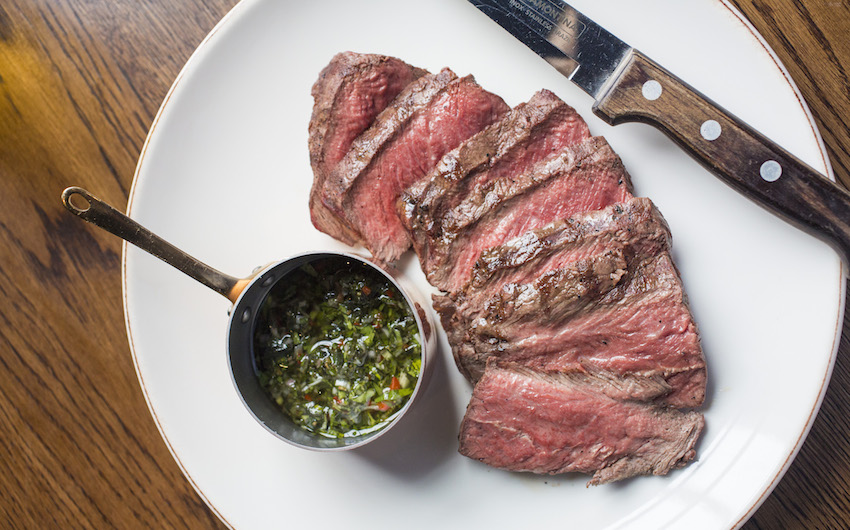 Brighton’s The Coal Shed and The Salt Room are known as two of the city’s best restaurants, having picked up lots of positive reviews including from the likes of Jay Rayner. We’ve never actually made it down to either of them but having heard all the good things, we’ve certainly been looking forward to The Coal Shed arriving in London, and now it’s finally open at the new One Tower Bridge development.

The menu is a relatively simple affair, being all about fresh grilled meats and seafood, much of which is delivered daily fresh of the boats from the south coast. We had a hard time choosing what to have but eventually settled on a whole roast sea bass to share for our main, which was expertly filleted at the table by our waitress. The fish was a monster and certainly enough to feed two in itself but it also came with some beautiful fresh mussels and creamy mashed potato. The coal roasted carrots are a great side to go with it too.

Knowing we were having fish for the main, we went for meaty starters, including a very meaty pork cheek with a sweet sticky maple glaze, and a more delicate but just as successful quail with merguez. We also had a snack of crispy beef tendons, reminiscent of pork scratchings but with a richer flavour – they’re well worth a try.

For dessert, look no further than the freshly baked doughnuts, a pimped up version and far superior version of what you might find down on Brighton pier. Service was absolutely fantastic throughout too and even though One Tower Bridge is yet to quite find its feet as a destination, The Coal Shed provides more than enough reason to go and check it out.