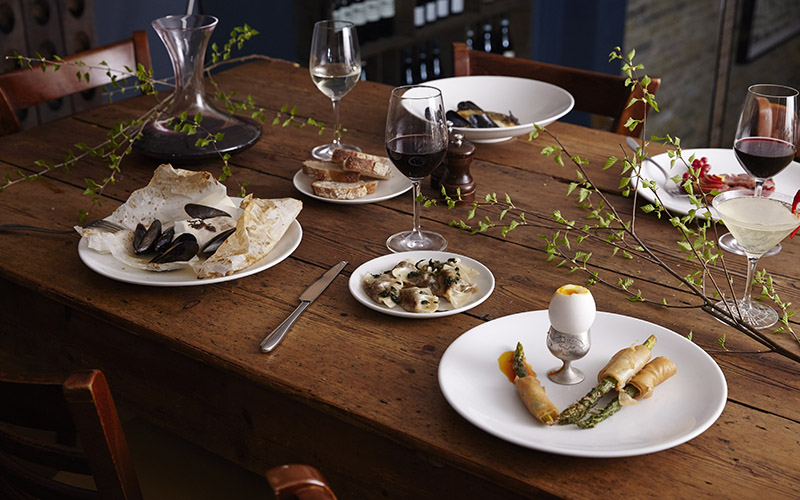 The 12th century building of the Clifford’s Inn on Fetter Lane has quite a history. It was once the place you’d go to learn about the legal system, it’s been passed from Lord to Lady and back, and sold for £100,000 in 1903 before being demolished in 1934. Part of it was once the home of writer Virginia Woolf too. These days, Clifford’s is an all-day dining restaurant and the first solo venture from Gemma Ellis (previously at Michelin-starred pub The Harwood Arms), that’s knocking out some retro bar snacks and modern classics with daily changing menus.

The basement restaurant is more like a bar, a posh bar, and if you frequented 28-50, the wine bar that used to be there before Clifford’s was born then it should look fairly familiar to you. The cocktail menu is a hit with quirky concoctions a-plenty. It changes frequently but we’d recommend trying the Bittersweet Symphony at least three times.

The bar snacks had us particularly excited; it reads like the buffet menu we’d want at our own party. Boneless chicken wings with house buffalo sauce were served alongside celery sticks and yoghurt dip for those who need to cool off. Speaking of HAWT, the ham and cheese croquettes on a bed of pickles and a side of sweet, sticky jam were sensational. Our only mistake here was not ordering more.

Starters of crispy duck wrapped in chicory and served with segments of orange and the herb crusted razor clams with a big wedge of lemon arrived both looking monumentally appealing. The crunchy, crispy, tangy textures and flavours of the duck really got the nods of appreciation.

On the mains the signature plaice Veronique – the famous French classic of rolls of fish drenched in a rich fish sauce and topped with sliced grapes – was very oh la la. The grilled Suffolk lamb chop, cooked to a beautiful pink on the inside, came with a helping of aubergine, yoghurt and plenty of crispy onions to complement that soft, tender meat.

Hats off to Gemma, the food here is great and, damn, that snack menu… we can’t wait until our next birthday to come and devour the lot.

BOOK A TABLE
powered by OpenTable

TAVOLINO TO OPEN IN LONDON BRIDGE (88)

KELIS IS BRINGING HER MILKSHAKES TO THE YARD (86)

BYO HOUSEHOLD AND BYO GROCERY TO OPEN IN NUNHEAD (59)