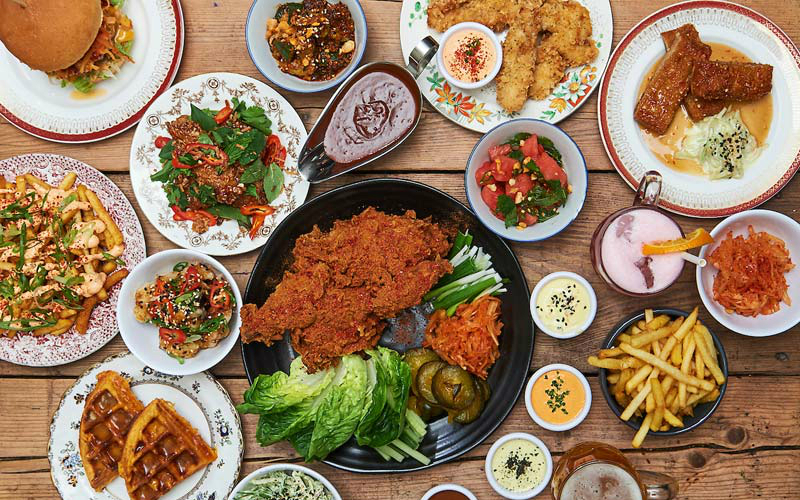 The OG Chick ‘n’ Sours in Haggerston has been closed the past few months for a face lift and now it’s back in business with a new look – including a basement bar – and a new menu, but still with those free range Somerset birds. Most of the new dishes, like the ssam style 1/2 fry and chicken toast, were put through their paces at the Chick ‘n’ Sours pop-up in Brixton back in May, and if you didn’t try them then, boy are you in for a treat.

Chicken toast is one of the newbies, and is described as “just like prawn toast but with chicken”. Cluck yeah. The meat is succulent with a nice tang from the chilli fish sauce caramel dressing, and the kohlrabi and apple slaw on the side helps to cut through the richness. It’s mad and genius in equal measure. Crispy soy pickled shiitakes are also a new creation; the deep fried nuggets are so meaty you’d never know you were eating a mushroom and they come sat in a creamy seaweed dip. Another interesting invention, and best of all, these small plates have been scaled down slightly so you can try more.

The buns are all still there (and still bloody massive) but they’ve been joined by the Seoul Destroyer, which has been a special in the past and is now back for good. It’s got a fried thigh covered in a Korean glaze made with roast chicken fat and topped with a huge pile of kimchi and nacho cheese – the chicken is ridiculously crispy so there’s still some texture underneath all those wet toppings and it’s got just the right amount of heat behind it. And it will go everywhere so just embrace the mess.

We were already fans of Chick ‘n’ Sours but it’s come back better than ever.