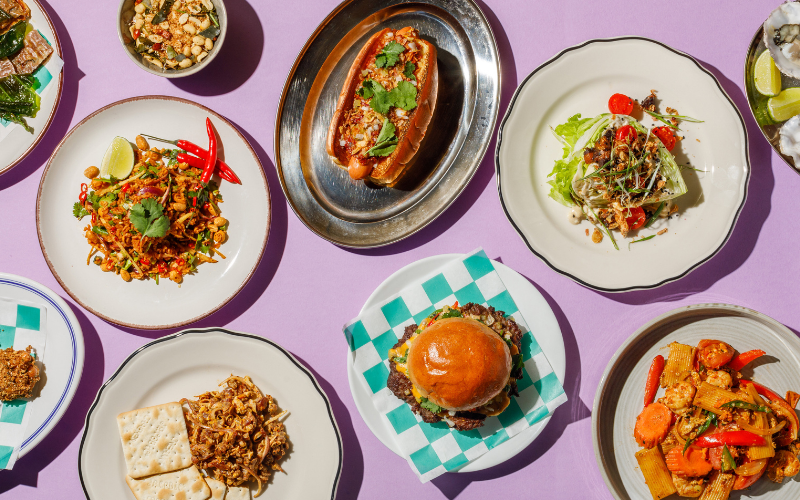 They’ve already had Peruvian in Cantina Valentina and pizza with Four Corners, and now Rondo La Cave has gone Thai-American with its next resident – and it’s a very special one. The natty wine bar and kitchen space below Rondo at The Hoxton, Holborn has brought in Chet’s, a brand new restaurant created in collaboration with Kris Yenbamroong of cult LA Thai spot, NIGHT + MARKET, for a four-month pop-up, before it moves to a permanent home in Shepherd’s Bush in the winter.

Chet’s blends classic American food with Thai flavours and ingredients, drawing on Kris’ childhood at his family’s restaurant Talesai in LA and his experience from his own spot NIGHT + MARKET, a favourite of the likes of chef David Chang, who featured the restaurant on his show Ugly Delicious. The balance between familiar and different has really been nailed – there’s lots you’ll recongise when reading the menu but the tastes are new, so you’re not gonna find food like this anywhere else in town.

The fried chicken has all the appropriate crunch and the red eye dip served with it is properly spicy (it also comes with a pot of cooling ranch), setting the tone for the rest of the meal – this place isn’t going to pull any punches when it comes to flavour. The hamburger and the hotdog are perhaps the ultimate American dishes and you can find versions of both across London, but the ones at Chet’s manage to set themselves apart. The smashburger, a blend of pork and beef, topped with secret sauce, American cheese and pickle, is lifted by chilli and coriander, and the Chaing Rai chilli dog is a classic frank in a beast of bun, smothered in a smoky sweet chilli that has a real tang to it, finished with more coriander and fried shallots for texture.

The wedge salad is absolutely the star of the show though, and it’s not often you say that about a salad. But this is no ordinary pile of leaves, this is a monster wedge of iceberg smothered in a blue cheese dressing, spicy and garlicky nam jim, and candied pork jowl, giving you funk, sweet, savoury and texture all at once. A banger.

There’s only one dessert on the menu and again, it’s a dish that shows off the marriage of Thai and American elements. The som tum sundae is vanilla ice cream topped with som tum caramel, condensed milk, and the spiced Thai beer nuts from the main menu. It’s simple but so effective, mixing the sweet and the savoury for a real moreish pud.

The food pairs brilliantly with natty wine and Rondo La Cave has those on lock with a selection of by the glass, bottle and magnum – go big or go home.