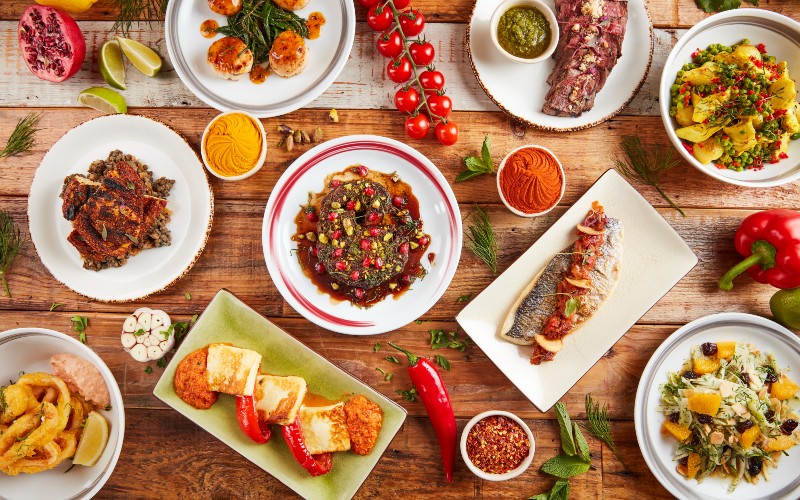 Ceru, which specialises in Levantine food and vibrant flavours of the Eastern Mediterranean, has been open in South Kensington since 2014 (the sister Soho site is relocating to Queensway later this year), but the street it’s on has been pedestrianised during the pandemic, making it the perfect spot for al fresco dining throughout the summer.

The menu, which includes a selection of Levantine salads, seafood, meat and veg dishes, is meant for sharing. We struggled to pick a dip to start with as they all sounded good so went for the Three In One, a spoonful of Houmous, Fadi (a roasted zucchini dip) and CERU Hamara (a tangy red pepper dip with pomegranate molasses) which were served up with a big bowl of warm toasted pitta bread for dunking.

We followed these by sharing the zucchini and feta fritters, sticky roasted baby aubergines, and Merguez chicken, which was full of flavour and came with a warm lentil salad. Sides-wise we’d recommend trying the Orez CERU, an Arabic scented fried rice topped with crispy onions & sultanas, and the spiced polenta & feta fries, which were crispy on the outside and fluffy on the inside, paired with a creamy mint and dill dip.

The dessert section is a mix of traditional sweet treats combined with a couple of eyebrow-raising dishes. Although we were certainly intrigued, we sadly weren’t feeling brave enough to try the liquorice & goat’s cheese ice cream so played it safe with the Ipsola, a twist on classic profiteroles filled with ginger & coconut cream and drizzled in date molasses, which certainly ended the meal on a high.

Ceru is great value, especially for the area, and as well as flavoursome food they have a big selection of Levantine wines available – and if you’re off the sauce, the softies like homemade lemonade are great – so it’s an easy way to take a trip to the Med without leaving town.