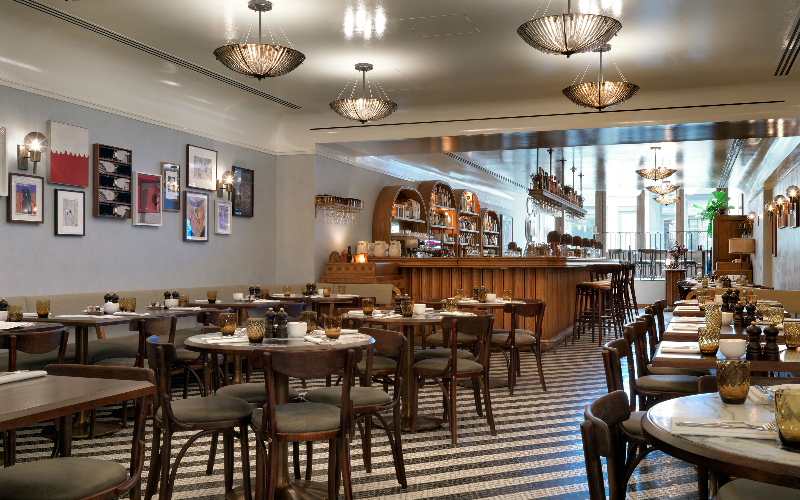 They’ve already taken over a sizeable corner of Shoreditch with Shoreditch House, Pizza East, Dirty Burger and Electric Cinema, and now Soho House has added one more property to the list with Redchurch Street Townhouse. And as well as 37 rooms, the boutique hotel is home to the newest Cecconi’s.

Similar to the Mayfair flagship, Cecconi’s Shoreditch serves up the same Italian faves but with a more relaxed vibe… we’re in East London after all. The restaurant very much looks the part with a black and white tiled floor, marble tables and artwork-covered walls, and on our dinner visit, some rather moody mood lighting (and it was even darker in the bathrooms).

Following a round of Sanguinello Sours – beautifully pinky orange and dangerously easy to drink – and a plate of crisp, salty focaccia, we started strong with a fat ball of creamy burrata and one of the best tuna tartares we’ve had in a long time, generously dressed with chilli and oil. The lobster spaghetti is a Cecconi’s classic and rightly so. There’s a kick to the tomato sauce but it doesn’t overwhelm the taste of the lobster meat, which comes in nice big chunks, and like all the pasta dishes on the menu there’s the option to get it in a sharing sized portion for the table. The aubergine parmigiana also hit the spot, especially as they don’t skimp on the cheese.

The Shoreditch outpost of Cecconi’s is an instant hit – it’s classy but not stuffy, it’s got a buzzy atmosphere and the service is totally on point, just as you’d expect from a Soho House operation.