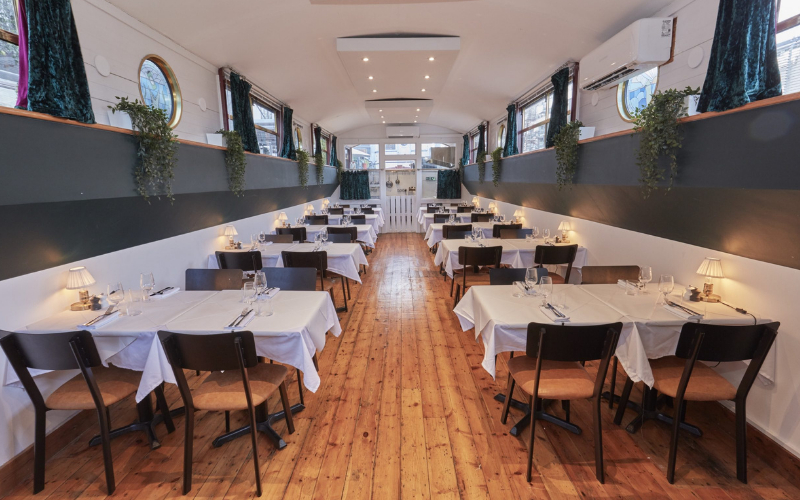 London is no stranger to the ‘restaurants on converted barge boats’ sub-genre: you’ve got The Cheese Barge, Darcie Green, and London Shell Co’s The Grand Duchess and The Prince Regent (which actually cruises up and down) all over in Paddington for instance. And the latest to hit the waters is Caravel, which has recently opened on the Islington stretch of Regent’s Canal.

Of all London’s boat restaurants Caravel is definitely the best looking inside – a smart, dimly lit space with white tablecloths and wooden floors that just happens to be on a boat. The duo behind Caravel are brothers Finn and Lorcan Spiteri, whose dad John Spiteri most recently opened Sessions Arts Club, and there’s almost a similar atmosphere here at Caravel despite the very different settings. It’s an absolute ideal date night spot.

First out of the kitchen, which is semi-open at one end of the barge, were a couple of super snacks to kick things off: golden crisp potato rosti, topped with sour cream and a dollop of salty caviar, plus some speck ham with homemade pickles. We could have eaten a second round of both, and maybe even a third and fourth of the bite-sized rostis.

The ‘starters’ section was sounding so good we couldn’t bear to let any pass us by, so we ended up ordering four out of five from here, and then just one of the larger plates. No regrets. The duck croquette is a fun dish – not just a boring old normal round croquette but a giant one in the shape of an actual duck, and very tasty too. The sesame prawn toast, spiked with chilli and lime, is another hit served with a tangy chilli sauce.

The next two were played more straight: a pretty perfect, rich chicken liver pate served with slices of brioche toast and pickles, and a fresh winter tomato salad with Roscoff onions. Our one main course was pressed lamb with sprouting broccoli and anchovy, plus a side of crisp roast potatoes. It was hard passing up the crab tagliatelle which sounded amazing, but we were glad to save room for two desserts; a delightfully retro wobbly rhubarb jelly with Chantilly cream and honeycomb, and a lovely caramelised banana and almond tart.

Personally, we would have liked to have seen some natural wines mixed into the classical selection on offer – we are on a barge restaurant on the fringes of east London right?! Joking aside, perhaps it’s an intentional choice to go against the grain of the local area which is fair enough but we think they’re missing a trick. Luckily the cocktail menu floated our boat so it’s all aboard captain!