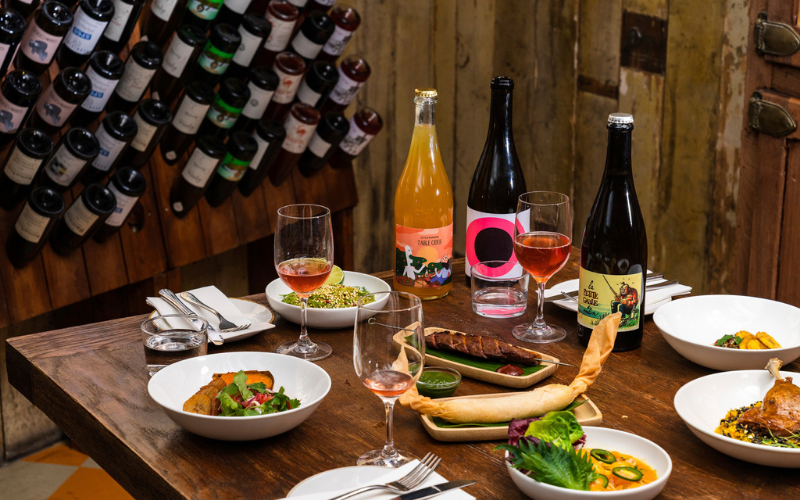 Rondo La Cave, the new opening underneath Rondo at The Hoxton, Holborn, may be one of the best wine bars in town, but it’s so much more than a place to crack into the natty wine. It also functions as an incubator space, giving chefs a place to test out new ideas and concepts before going out and braving the big bad world of hospitality and restaurant ownership, so it’s very much somewhere you can come in and have a full meal. If you love a bit of counter dining, there are some great seats in front of the open kitchen but there are also plenty of tables if you’re after something a bit more intimate.

Cantina Valentina, a Peruvian inspired pop-up from Adam Rawson (ex-Pachamama), is the debut resident (and will be there until December) and the food is epic. The el teqeuno cheese wonton, a giant Christmas cracker of pastry filled with oozy cheese, and the pork belly chicharones with aji criollo are absolute must-orders. We were told by the team that these would be the best chicharones we’ve ever had and they weren’t wrong – proper crispy little cubes of joy coated with spicy, sour vinegar powder. We also loved the carabinero prawn & yuca croquettes which had a really deep prawn flavour, like bisque that’s been breadcrumbed and deep-fried, and the lima bean hummus with tostones; we can never say no to fried plantain and it’s great for scooping up the silky dip.

Given it’s a Peruvian kitchen you’ve gotta have at least one of the ceviches, and we went for the sea trout one with a really punchy passionfruit & turmeric tiger’s milk along with lettuce to make little wraps, which gave it some extra texture. The maitake mushroom carapulcra with dried potato is the ceviche’s polar opposite – a rich, earthy stew blanketed in black truffle – but no less moreish. And the avocado & coriander quinotto, which is essentially a risotto but with quinoa, so it’s much nuttier, felt very virtuous being packed full of green goodness.

The coconut, puffed amaranth & dulce de leche alfajor is the perfect way to end, as you get the sweetness from the caramel but no stodginess, although it’s absolutely impossible to share so take our word for it and just get one each.

Obviously, you can’t come to a wine bar and not try the wine, and with a changing selection by the glass up on the blackboard and the bottle list on the menu, you’ve got lots of interesting options. We say leave it in the hands of the very capable (and very funny) team, who brought us some great glasses including a sparkling Col Fondo, which is now our new fave alternative to Prosecco.

Rondo La Cave absolutely hit it out of the park with Cantina Valentina and we can’t wait to see where Adam Rawson takes it next and who’s gonna follow in his footsteps at the wine bar’s stoves.