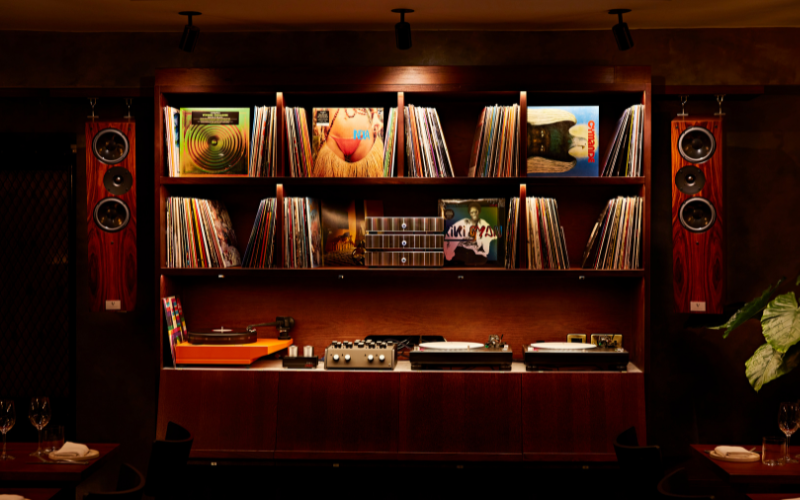 Open fire cooking has come to Notting Hill as Caia (appropriately named after the Roman goddess of fire) has just opened on Golborne Road. Founded by locals Rishabh Vir and Tim Lang (who are also part of the team behind Fiend in Portobello) the neighbourhood spot is serving up seasonal dishes using locally sourced ingredients cooked on the open grill. Talking of the grill, there are seats directly overlooking it where you can watch the chefs at work, with two-tops the other side of the wall, a floor-to-ceiling wine display in the rear room, and more intimate tables downstairs.

If you do sit downstairs, the first thing you’ll notice is the impressive sound system; designed by Living Voice founder Kevin Scott, it features a Kuzma R record player and Auditorium R-25 A, with the vinyl selection curated by the likes of Stranger Than Paradise, Phonica Records and Honest Jones. Unsurprisingly with a set-up like that, the soundtrack is on point and it really sets the vibe for the evening.

Head Chef Jessica Donovan’s (ex-The Pem) menu is broadly European, flecked with some Asian and Middle Eastern influences, and she certainly making the most of the summer’s crop. Cuore del Vesuvio tomatoes came paired with sweet melon, seasoned with green dressing and a blanket of Berkswell cheese; grilled sugar snap peas were doused in gremolata and topped with what was advertised as brown crab butter, which turned out to be a foam and with no distinct taste of crab at all, but they were moreish enough without it; and a perfectly flaky piece of monkfish on a buttery sweetcorn sauce was the ideal summer fish dish.

Even the more autumnal-leaning dishes we tried showed a lightness of touch from the kitchen. The king oyster mushroom schnitzel, really mushroom nuggets with a fancier job title, were crispy without a hint of greasiness and offset with a tart plum & chilli ketchup, and the smoked potatoes with borlotti bean puree, squash miso and parmesan was remarkably un-stodgy considering it was a real symphony of beige.

There were only two puds on the menu on our visit (excluding a cheese plate) at the opposite ends of the dessert spectrum. The peach with lemon granita and verbena tea showed off the summer stone fruit, but the rest was so delicate that other flavours were barely identifiable. No such problems with the chocolate eclair; filled with plump creme de cassis-soaked cherries and tonka bean chantilly, it was an excellent riff on a Black Forest gateau.

The wine offering at Caia has curated by wine expert Beth Brickenden and we left our drinks order in the hands of the team, who delivered a crisp riesling, a shiraz made in London, and an amaro with the puds – the wine list isn’t massive but there’s a good mix of familiar and new producers so we can recommend letting them lead the way.

There’s lots to like here already but it’ll be interesting to see how the music element of the venue will evolve and whether it can elevate Caia above being a wine bar and restaurant.