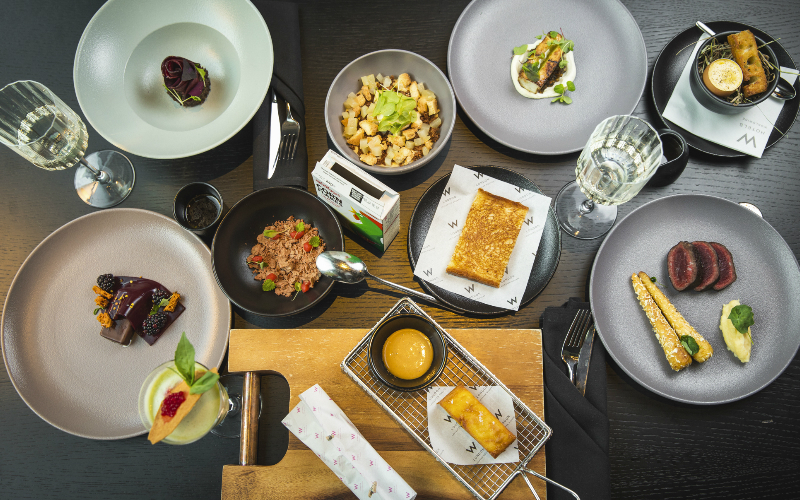 Following on from Ravinder Bhogal’s vegan menu, the Dining Series is back at The Perception at W London with Ben Murphy, currently Head Chef at Launceston Place, taking charge. He’s gone for a seven-course tasting menu inspired by his childhood memories, and he’s not been afraid to be playful with the dishes – the menu itself doesn’t reveal too much but you get a proper explanation of what the plates are about as they come out.

It kicks off with an egg & soldiers amuse bouche. Naturally this is not your standard dippy egg, rather it’s a foie gras royale topped with a scrambled egg mousse and served in an egg shell, which is both intensely flavoured and feather light. The chicken liver parfait and blood orange course, a nod to Ben’s grandad, comes with a cereal box filled with chicken skin granola, so you can add in some crunch to mix up the textures on the plate.

We also loved Ben’s take on fish & chips, which was hake, pont neuf potatoes and a shellfish bisque mayo, the other main of super tender venison with pine and parsnip three ways. The menu concludes with two desserts and our fave was his version of a choc ice. Again, this is pretty far away from the one you’d get from the corner shop back in the day thanks to the addition of honeycomb, blackberry and a little blanket of blackberry gel.

Not only do the dishes taste (and look) great, they really do get you talking and reminiscing about the food you used to eat as a child, so Ben’s nailed it there. The menu will only be on for four months before the Dining Series changes hands once again, so find some time in the diary if you wanna try it out.