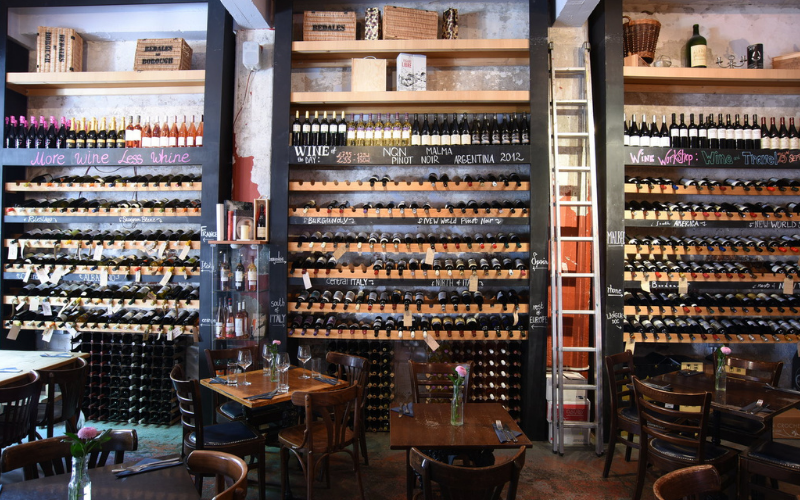 You’re not exactly short on food in Borough Market but if you want to escape the crowds and get a proper meal whilst still remaining close to the action, Bedales of Borough is the perfect little sanctuary. It’s primarily a wine bar – you can come in for drinks or pick up a bottle and with seats directly on the market, a window counter at the other end, and a terrace on the first floor, it’s a great spot to people watch over a wine or two. You’d be missing out if you passed on the food though, especially as they’ve just launched a ten-year anniversary to celebrate the milestone.

Bedales of Borough had been both a potato store for the market and the Greek restaurant featured in Bridget Jones’s Diary before it was transformed by Rob Dann, Jamie Watts and Mario Sposito in 2012 into the place it is today, and what a beaut spot it is with distressed concrete floors and walls, and shelves heaving with wine. The vino selection is extensive as you’d expect but they’ve got special by the glass and bottle options from the 2012 vintage on offer as part of the tenth anniversary celebrations – we went straight in with a glass of champagne, because how else do you toast a birthday?

Co-founder Rob’s (who’s also the man behind BOB’s Lobster) modern European menu features plenty of tapas classics, like heavily blistered and salted padron peppers, pork croquettes packed with shredded meat, truffle honey-topped manchego with wild boar salami, and chorizo cooked in white wine, and fittingly for a wine bar, you can really taste the quality of the wine the sausage has been cooked in.

We also loved the black pudding with crushed and fried Jersey Royals, which was bound by egg yolk sauce for even more richness, and the heirloom tomatoes and chilli aioli on a thick wedge of sourdough – a proper summer dish where the tomatoes tasted like the ones you get on holiday. A crema catalana, essentially a Spanish creme brulee, and incredibly decadent chocolate truffles, rounded off the birthday meal in style.

Much like the approach to wine, when it comes to food Bedales of Borough is all about using great ingredients – not hard when you’ve got one of the world’s greatest food markets on your doorstep – and treating them simply to allow the natural flavour to shine through. It’s a winning formula and one that’ll see them through the next ten years with ease.