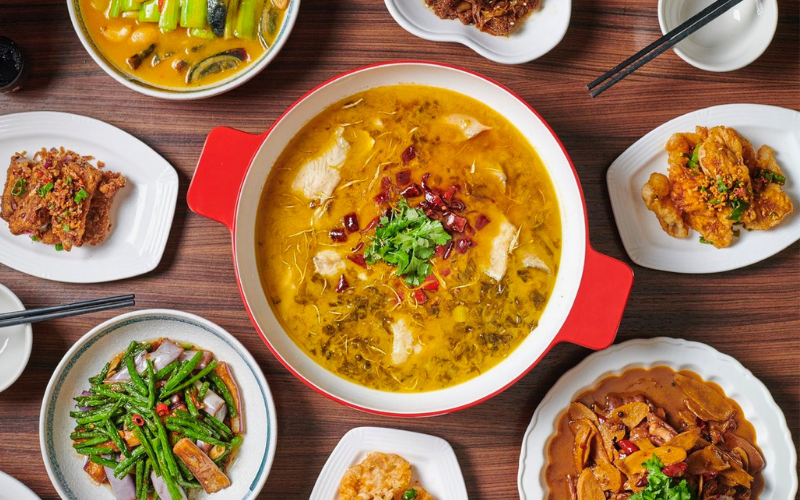 Good Sichuan restaurants are few and far between in London but one that has got quite the rep when it comes to southwestern Chinese cuisine is Barshu. Opening back in 2006 on Soho’s bustling Frith Street, the Chinese restaurant is still going strong, attracting a crowd of tourists and locals daily. This year Barshu also celebrated its 15th birthday, an impressive achievement in normal circumstances but doubly so considering there’s been a pandemic on.

To celebrate the milestone, Barshu has had a full refit inside and now the two-floor space is decked out with plenty of Chinese artwork and private dining areas upstairs. The menu has also had a re-work and for those who have visited Barshu before, you will know the menu is BIG, and can be overwhelming if you don’t know your stuff. Thankfully we had the staff on hand to help digest and make some recommendations, something we would suggest you do too, especially if you struggle with spice. A lot of the classic dishes have remained on the menu, as well as some new additions from regions including Chengdu, Hunan, Shanghai and Canton.

Although there are large and small dishes on the menu, they all come out when ready. It’s worth noting all the dishes are generous portions, resulting in us over-ordering and ending up taking a doggy bag home, so come hungry. From the small dish section, the highlights were the salt and pepper soft shell crab, which was packed of flavour; the spring rolls, the longest ones we’ve ever seen; and the exceptional smacked cucumber.

For the larger dishes, we ordered the golden soup with seabass fillets and Sichuan pickles. Designed to be shared, this rich and creamy broth came in a huge bowl and was packed full of fish and veg. In terms of heat, it was relatively mild but still provided that Sichuan tingle. The last dish we tried was Barshu’s signature dan dan noodles, another must-order that was cooked to perfection. We played it safe with our dinner but if you like to experiment, you won’t struggle to do so with the likes of pig trotters, intestines and beef tripe on the menu. As you can imagine after feasting on all of that we sadly didn’t leave enough room for dessert. A shame as we were definitely eyeing up their deep-fried rice cake covered in melted brown sugar.

After our trip to Barshu we were disappointed we hadn’t visited sooner. The Sichuan restaurant felt like one of Soho’s best-kept secrets, and given the food, service and overall experience, it’s one we will be adding to our list of spots you can rely on when dining central.