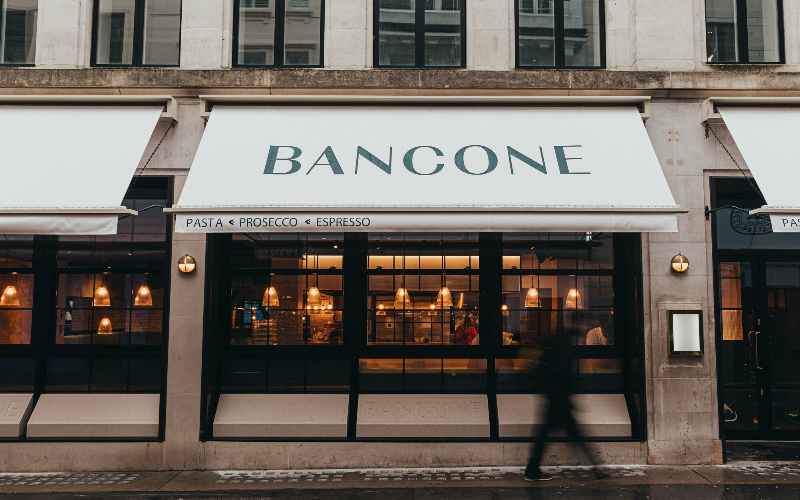 The pasta just keeps on coming (we’re definitely not complaining though) as Bancone, which only opened in Covent Garden last year, has expanded with a second restaurant in Soho. Bancone 2.0 has taken over the old Foxlow site just off Golden Square and the designers have done a real number on the place, adding an open kitchen and a beautiful olive tree inside (which you can actually sit around, in true Bancone counter fashion). It’s significantly bigger than the Covent Garden restaurant too, with a cocktail bar and private dining room in the basement.

If you’ve been to Bancone before, most of the menu will be familiar but Culinary Director, Michelin-starred chef Claudio Melis, and Head Chef Stefano Cilia have created new dishes like suckling pig belly and pan fried stone bass specifically for this one too. We kicked off with two thick slabs of honeyed garlic focaccia and burrata with radicchio and squash bringing in notes of bitterness and sweetness.

Sticking to two light starters meant we could go big on the pasta as this is what Bancone is all about. They’re main size portions so you could have one per person but it’s December and we’re carb-loading so we did three between two. The silk handkerchiefs with walnut butter and confit egg yolk, Bancone’s signature dish, was as good as ever and the trucioli ‘ondulati’ with winter vegetable crisps, cauliflower and truffle was so rich and cheesy that you’d never know it was vegan, but the squid ink tagliolini with tender sauteed squid, tomato, chilli and garlic was our fave of the night.

We loved the original Bancone and number two doesn’t disappoint; it’s a great looking restaurant, the pastas hit the spot and the prices have stayed super reasonable too. Nothing on the menu tops £14 and that’s practically a steal for Soho.