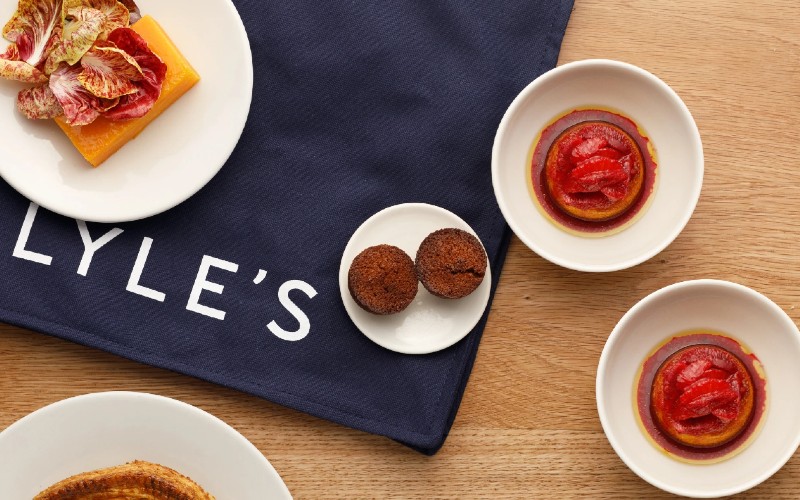 We’ve all been there by now: a nice midweek meal kit delivery to give yourself a night off cooking, only to find that what you’ve ordered requires 1000 steps, every pot and pan you own out the cupboards, and a mountain of washing up. Well the team at Lyle’s have heard you and they are now offering a special mid-week menu meal kit, with “less assembly, less work and less washing up”. Sounds good to us.

The kit for two is £70 and can be delivered within the M25 every Wednesday – not a bad deal for a mid week Michelin-starred dinner at home, and it really is so easy to prepare. The starter is a beautiful mackerel that’s already been cut in two and deboned, so all you have to do is grill it for ten minutes and then add the bright green lovage & preserved gooseberry sauce. Sounds simple enough but that sharp sauce is next level and turns this into a very special starter.

With sub zero temperatures outside what could be better for a main course than a big warming pithivier? This being Lyle’s, its not just any old pie of course. They make their own puff pastry from scratch, using flour they’ve milled in house from ancient grains. That’s dedication and it pays off; being northern, we would have happily just dunked sheets of this pastry in gravy all night. The pie is filled with rich, meaty oxtail from rare-breed Cornish cattle and boy is it good. Side dishes are a little orange swede cake and a bitter radicchio salad.

For dessert, you’re in for two treats. One is a round olive oil cake served with Sicilian blood orange and the other is those famous brown butter cakes from Flor. Heat them up for a few minutes and they will be warm and glistening with butter, just like you’d get in the restaurant.

To be honest, it still feels quite indulgent for a mid-week dinner but we’re not complaining – this Lyle’s kit delivers Michelin starred dining with minimum fuss, and that’s a winning formula in our book.