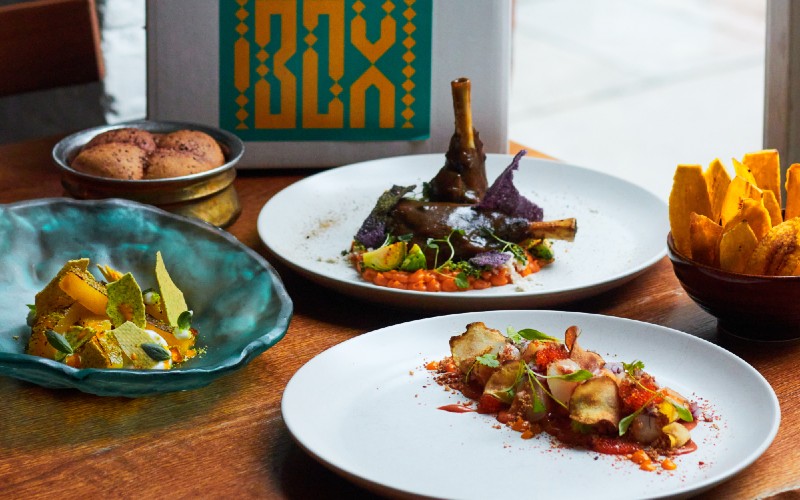 It seems like every restaurant in town has already created a DIY kit but we’re in lockdown 3.0 and there are still new ones, like Lima At Home, coming out. Anyone who’s eaten at the restaurant knows that Lima turns out vibrant, colourful dishes each containing multiple ingredients, so it’s not the easiest food to translate to the finish-at-home format.

We have to say that opening the box is very overwhelming as the LUX four-course menu has probably the most elements to a kit we’ve seen. Respect to them for committing to replicating the restaurant dishes so exactly but just be prepared for lots of pots of garnish. What does help is the fact that it’s more of an assembly job rather than involving much cooking as both the starter and dessert are served cold.

For the scallop ceviche the hardest thing you have to do is cut them up – from there it’s just mixing in the sauces and assembling with garnishes including onion powder, tobiko caviar and Jerusalem artichoke crisps. The main is where you’ll need to do some cooking – it’s just warming up really – with the milk-fed lamb going in the oven and pouches of sweet potato & pumpkin puree and sauce going to hot water. And the results are impressive; meat that falls off the bone, silky smooth puree, rich sauce and more interesting garnishes in roast Brussel sprouts and olive crisp shards.

So yes the Lima box appears faffier than other kits we’ve tried, though the dishes aren’t necessarily harder to put together, you certainly don’t end up using every pot, pan and utensil in your kitchen, and you get to finesse your presentation skills. You end up with very pretty plates and it tastes damn good too so it’s the one to get for a special occasion.