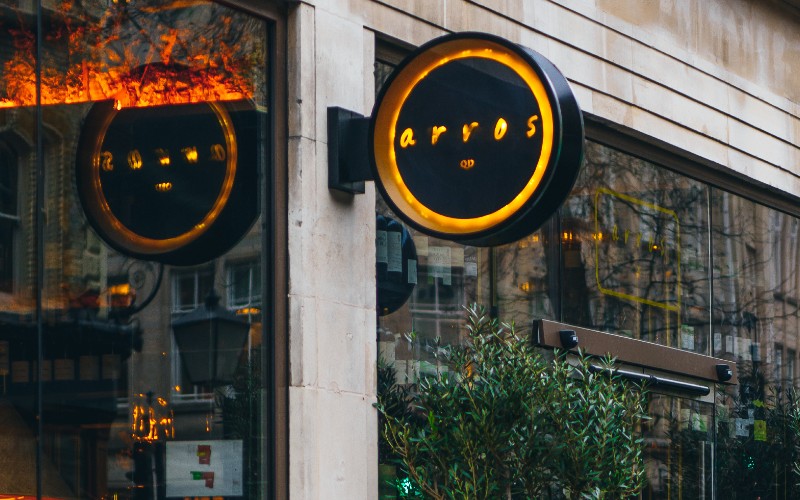 We first reviewed Arros QD back in July last year, not long after it first opened. The restaurant looks exactly the same, slick with black lacquer and with a huge open kitchen to showcase the bubbling pans of paellla, but a lot has changed since then – not only is there now track & trace and enforced mask wearing, there’s also a curfew in place.

The menu has also changed; it’s more streamlined although there are still a few South American touches from head chef Richard de La Cruz, like an excellent stone bass ceviche with sweet potato and dried corn, scattered amongst the Spanish. Cooking over fire is also still very much a focus. The red prawns, shells blistered from the flames are smoky, succulent and sweet inside, were some of the best prawns we’ve ever had.

There was more smoke with the Iberian presa, coated in charcoal and served under a smoke-filled cloche, which released a cloud of rosemary scent over the table when lifted. The mussels were also smoked, with that light barbecue flavour enhanced by a spicy bravos sauce.

As with the fire, the other pillar of Arros QD is rice and we went for the Mediterranean paella with bream, tiger prawns and cuttlefish. There’s only a thin layer of rice but that means more socarrat, the crispy bits of rice at the bottom of the pan, which we all know is the best bit anyway. The paella came with a noras pepper aioli but we’re garlic fiends so couldn’t resist adding on the black garlic aioli as well.

The practicalities of eating out may have changed but with excellent food, a couple of glasses of a juicy Spanish white and impeccable service, it’s still an extremely enjoyable experience.