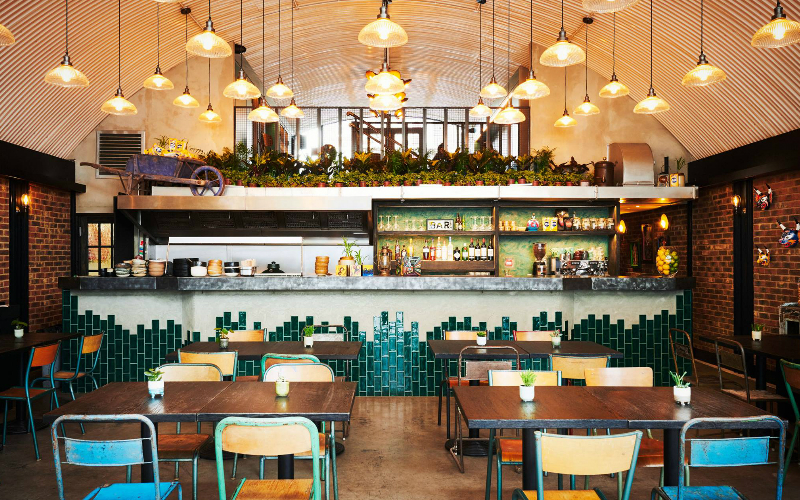 After starting life as a street food stall, husband and wife team Gus and Kathe opened the first Arepa & Co restaurant in Haggerston in 2014. Not only did it provide Venezuelan expats with a taste of home, it was also a hit with Londoners, so much so that they have expanded to Bethnal Green. The second site is housed in one of the arches (formerly occupied by Paradise Garage) on Paradise Row with the kitchen running across the width of the space, a private dining area on the mezzanine and plenty of outside seating on the terrace.

If you’ve never had Venezuelan food before, Arepa & Co is the place to start and the Bethnal Green site has a bigger menu than its predecessor, featuring a mix of classic and more creative dishes plus new rum-based cocktails. On recommendation from Kathe we tried the tajadas, moreish fried plantain topped with aji amarillo sauce, cheese and a coriander and spring onion salad, and the bunuelos, yuca fritters coated in sugar cane syrup and chilli, which give you a little of sweet and a little bit of heat.

You can’t come here and not try an arepa (a round stuffed cornbread for those who don’t know) and the pollo frito – beer brined fried chicken and corn puree with a guava, chipotle and tamarind glaze – was a winner for us. We also loved the pabellon cachapa, which features elements of the classic Venezuelan dish pabellon (pulled beef, black beans, plantain and cheese) piled on a sweetcorn pancake. It’s a slightly lighter option than having the pabellon with rice (also on the menu) but no less tasty and in fact the pancake does a great job of soaking up all the juices from the beef. And as these are corn-based dishes, they’re also gluten-free… very handy if that’s your thang.

Venezuelan food wasn’t something we were super familiar with, bar the occasional arepa now and then, but Arepa & Co have certainly changed that, and we’re already plotting a return journey for their brunch.