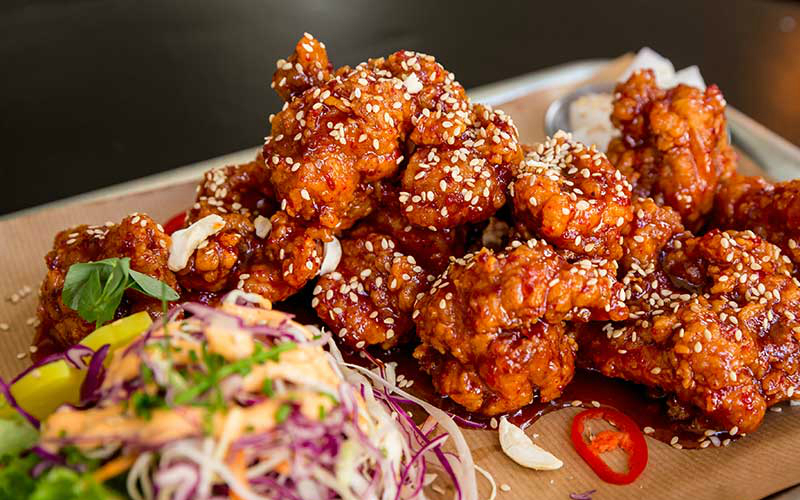 East London isn’t blessed with a huge amount of Korean restaurants – there’s Yanji BBQ on Bethnal Green Road and takeaway spot Jijigo – but with Anju joining the party, having taken up residence at The Gun in Hackney, we’re slowly getting more options in this part of town.

Anju is actually the perfect match for the beloved local boozer as ‘anju’ is the Korean word for food that’s eaten with alcohol. Founder Taewoo Kim has even adapted the menu (Anju operates another site on Green Lanes) to make sure it goes well with the bevvies at the bar. You can eat in The Gun’s bar area but you’re better off grabbing a table in the upstairs dining room – the food comes out on trays and you’ll want the extra table space.

The short menu features dishes inspired by the food Taewoo ate growing up in Korea, including bibimbap and kimbap (Korean sushi). We went straight for the KFC though, trying both the chicken (with gochujang) and the cauliflower (with honey butter glaze). Crisp and juicy, even when liberally glazed, the Colonel has nothing on this fried chicken, and the cauliflower was just as good.

Anju also does its own take on Korean BBQ, minus the DIY element, by serving the meat together with rice and ssam salad. The 24-hour slow-cooked short rib had a great char covering soft, tender meat underneath. The kimchi mac & cheese was our choice of side and it’s as indulgent as it sounds; mega savoury and mega saucy with a nice chilli kick from the kimchi.

It’s exactly the kind of food you want to eat with a couple of pints but it’s just as moreish if you’re off the sauce – just make sure you have water to hand.