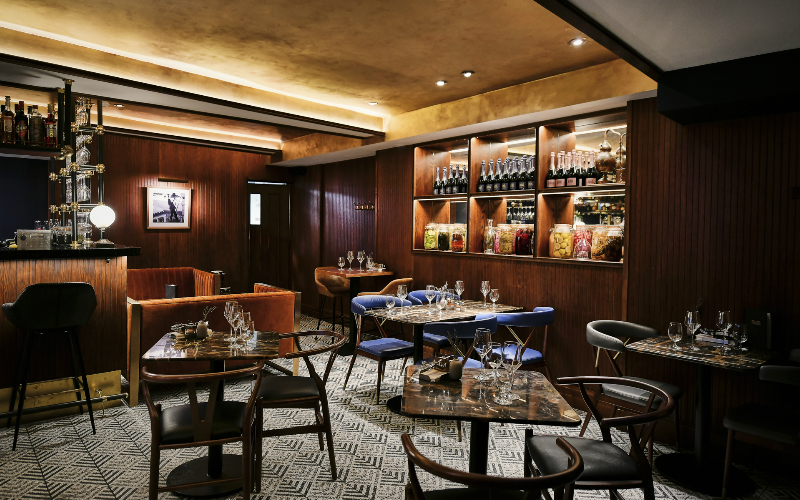 Chef Mark Jarvis and sommelier Xavier Rousset have already teamed up to re-open The Gunmakers pub in Marylebone and now the pair have partnered up once again as Jarvis’ Farringdon restaurant Anglo has taken up residence at TRADE in Soho, a members’ club for hospitality industry professionals run by Rousset along with Gearoid Devaney.

With Anglo @ TRADE, the club is opening to non-members for the very first time, offering a limited number of tables as well as access to the Coravin cellar for wine tastings. It’s definitely worth trying to score one – not only is a great space (the tables set in the alcoves are particularly cool), the food is on point too.

Anthony Raffo (formerly of Texture, Pied a Terre and Auberge du Lac) is heading up the kitchen, which is turning out both an a la carte and a tasting menu. Anglo is known for the quality (and value) of the latter, so that’s what we went for. The opening snack of fermented cauliflower and chive veloute, which had a very distinct funk, and buckwheat crackers reminiscent of pork scratchings, set the tone for the rest of the meal – punchy flavours and plenty of textures.

Other highlights were a rich, earthy dish of venison with celeriac puree and crispy kale; a clever re-imagining of a cheese course served about two thirds of the way in, consisting of a raisin puree, topped with Tunworth cheese, a whipped cheese cream and puffed rice; and a dessert listed as ‘parsnip, hay, miso, smoke’, which turned up as ice cream covered in white and grey powder, and was smoky, sweet and savoury all at once.

The Anglo @ TRADE tasting menu is six courses for £55 (and £90 with wine pairing), which is actually great value for the quality of cooking on show, so make the most of the residency whilst you can.