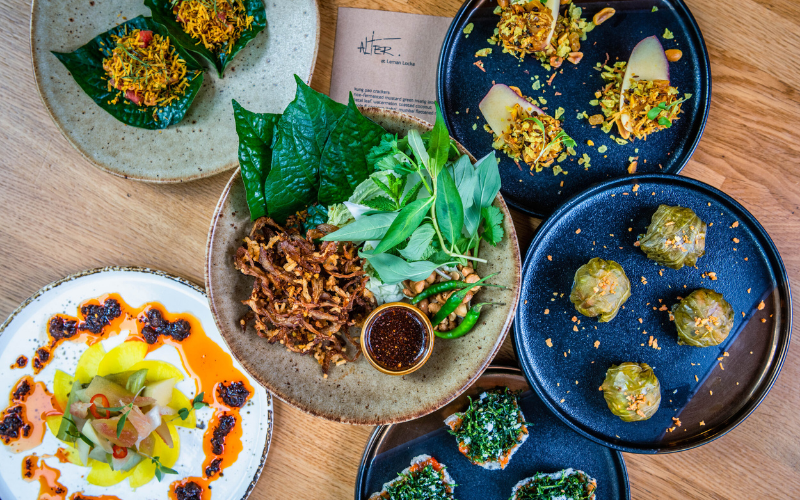 There’s plenty of vegan spots in London and Alter is one you want on your radar, not just for Veganuary but for life. After a successful residency in Clapham, founder Andy Goodwin (who trained under Andrew Wong, as well as worked at the likes of Dabbous and Som Saa) has planted Alter’s roots on the top floor of the Leman Locke Hotel in Aldgate East.

Everything on the menu is entirely plant-based and plant-derived, so you won’t find any meat and dairy substitutes here and it’s all the better for it. Goodwin has drawn inspo from pan-Asian flavours and textures, marrying humble veggies and tofu with spices, herbs and other adornments. There’s big flavours and playful techniques put on the plate at Alter and we love to see it. Drinks-wise, it’s the same kind of vibe. we’re talking yuzu sake negronis and gin, guava & Thai basil cocktails. This place is all about fusion and doing it well.

When it comes to the menu, ask the team for their recs because even though it’s small, it’s not so simple; just tell them how hungry you are and leave the rest to them. We kicked things off with the izakaya pickle plate and it certainly kicked things off in our mouth. It’s a take on the Thai practice of eating sour fruits at the start of a meal, but Andy has paired it with a Chinese Sichuan relish to really wake up the palate. It’s making us pucker with joy just thinking about it. Pair this with the salty, sesame-y but ever so slightly sweet Kung Pao crackers and the watermelon Mian Khams which are wrapped in a Thai Betel leaf (and seen off in one) and you’re off to a mighty fine start.

Moving onto mains, which feel less like mains because everything’s served with a shared approach and keeps flowing throughout the evening, but were hearty nonetheless. First up was the Chengdu street tofu with bamboo sauce, perhaps the sexiest tofu we’ve ever eaten, whilst the charred Jordan cabbage with kolae coconut curry was rich, delicate and a really clever dish considering it was just a hunk of cabbage and sauce on the plate. The real star though was the Khao-Soi noodle laksa with oyster mushrooms. It had this sort of mellow fieriness going on, together with crunchy bits and a gloriously thick broth.Sadly we peaked too soon which meant no room for pud, and catching sight of the steamed peanut sugar baos we’re still regretting our decision.

All in all it’s a sleek, modern yet unassuming space, but that kind of makes sense given that these guys aren’t the preachy vegan kind, instead they put their energy into the food and it defo pays off. Not all vegan restaurants are created equal. Some are hidden in Aldgate, throwing out the vegan rule book and worth schlepping on the Circle Line for. Alter is giving the veggies often shunned to the side plate the glory they deserve. Take your vegan friends, take your not vegan friends – just go.