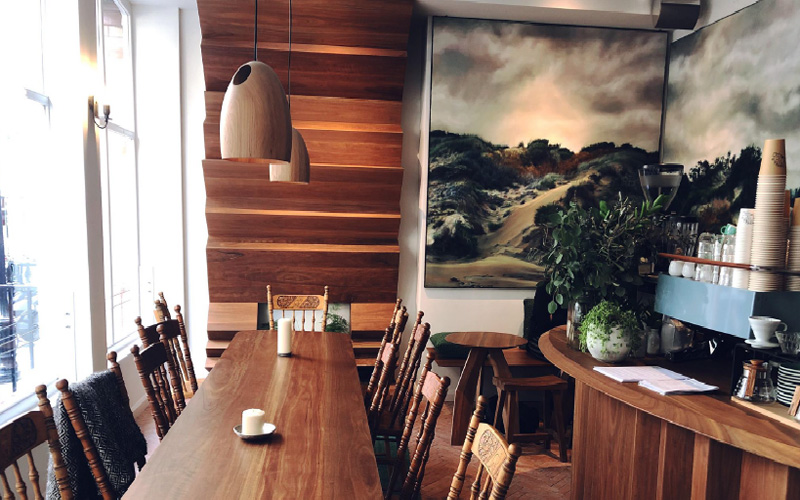 If there’s one group of people in the world who really ‘get’ coffee, it’s those Australians. Yep, we’ve got to give them that. But it’s not just the coffee they get right, it’s the whole coffee house package; the interiors, the mood, the plants (by God the plants) and all the other subtle things like a smile and a “how’s it goin?”. Covent Garden coffee house Abuelo (that’s Spanish for grandfather by the way), launched by an Argentine-Australian mother-daughter duo who were also involved in successful Sydney and Melbourne cafes Zigolini’s and Trazini’s, delivers just that.

So what is a South American-named, Australian-inspired coffee house doing in the heart of Covent Garden then? Well it’s providing that caffeine fix with speciality coffees and teas along with an all-day dining menu. First impressions are great; it’s a small room focused around a huge communal table that represents their ‘kitchen table’ approach to making you feel welcomed and looked after. There are also a couple of spots in the corners where you are sat next to huge leafy plants and artwork that is so big it spans the length of the wall behind you.

Abuelo’s menu reflects its South American influence, which was tried-and-tested down under. It’s fresh, organic and uncomplicated food. We went for the smoked paprika arepa with organic slow-cooked pulled beef, mustard mayo, semi-pickled red cabbage and raw slaw. The beef was super soft and juicy, and given plenty of crunch with that raw slaw and cabbage. It’s a generous portion and one of their heartier dishes, so you need to be “heaps” hungry to demolish this (we did, obvs). Their summer salad, with fresh lemon hummus, red pepper salsa, semi-pickled red cabbage, broad beans, pine nuts, cashew ‘cheese’, spiralized veg and little leaves felt like sunshine in a bowl, and we’ve had dreams about their greens smoothie, made of Passion Project Greens, spinach, dates, honey and milk.

For the coffee connoisseurs who are looking to get in deep, you are in safe hands here thanks to their combo of Aussie techniques and South American beans.