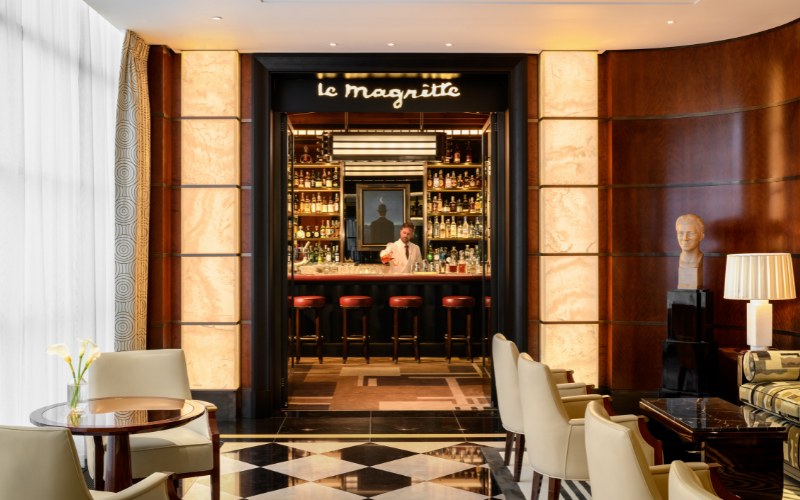 Five-star Mayfair hotel The Beaumont recently underwent a big refurb, which included making over the spa and moving the Le Magritte bar into a totally different part of the property. Now nestled in the corner close to the entrance, the American-style bar and terrace takes inspiration from the Roaring Twenties, with red leather seats, a huge retro bar and a selection of 20th century paintings and photos hanging from the walls.

Bar Manager Antonino Lo Iacono has created the cocktail list, inspired by René Magritte, the surrealist artist whom the bar is named after. The cocktails, each named after famous art works, also come with easy tasting notes, great for deciphering your way through the list. We worked our way through the menu with favourites including the Empire of Light 1950, made from mezcal, cocci Torino Rosso, amaro averna and orange zest oil, and the Pilgrim 1966, a citrus cocktail made with pisco. As well as cocktails, Le Magritte has an extensive list of bourbons and American whiskies to choose from too.

A bar snack menu can be just as important as the cocktail list, and Le Magritte has it nailed. As well as a choice of oysters and caviar, they also have a small snack menu created by The Beaumont’s head chef Ben Boeynaems. We went all out and indulged in plenty of truffle (we were in a swish hotel after all) ordering the truffled pizza bianca, which was topped with Islington coppa, and the French toast with bacon jam and truffle. We also got a portion of the chickpea fries, with jalapeño ketchup, which were crunchy on the outside, soft on the inside and everything you want a fry to be.

The decor, drinks and atmosphere of Le Magritte successfully transport you back to the Twenties, so if you’re looking to splash the cash and celebrate something big, then add it to your list.