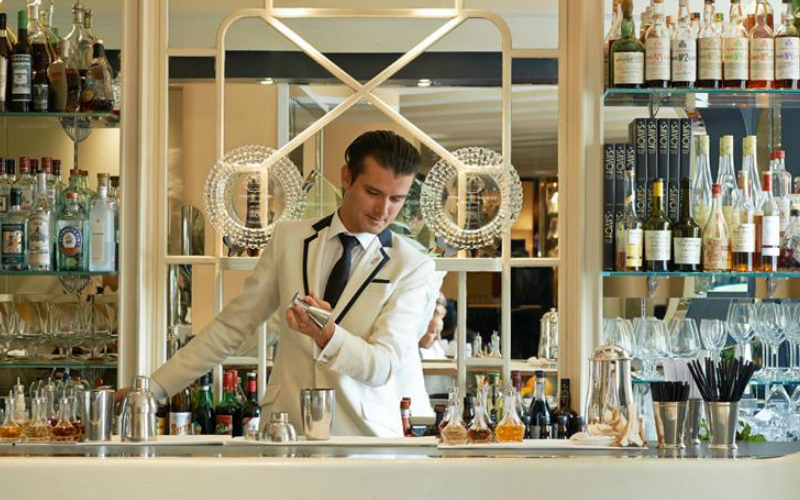 Following its award for Best Bar in The World at World’s 50 Best and news of Head Bartender Erik Lorincz’s departure, the American Bar at The Savoy has launched a new cocktail menu. The bar, located inside iconic 5-star hotel, has quite the history and it’s hard to step inside without feeling like you’re in somewhere special.

The new menu named ‘Every Moment Tells A Story’ draws inspiration from twenty iconic black and white portraits by British photographer Terry O’Neill that have adorned the American Bar walls since the 1980s (they are older than us!). Featuring the likes of Ava Gardner, Elizabeth Taylor, David Bowie, Judy Garland, Peter Sellers and Dudley Moore, each one reveals a hidden story, which is matched to a cocktail. Said cocktails are then plotted into a tasting graph, with length of drink and light vs dark as its indices. Sounds complicated we know but it’s actually pretty helpful as it shows you the strongest and longest drinks and vice-versa.

We worked our way through the graph, beginning at the lighter end with a Pinstripe themed one inspired by a suit won by Mick Jagger, followed by the Fish Out Of Water based on a shoot with Peter Cook & Dudley Moore, and ending with a You & I based on an image of Barbara Streisand with an Academy Award. The cocktails are all pretty creative, coming in different glasses with different quirks but they were all super drinkable too, and if you need any help the men in white suits are on hand to help.

It’s certainly not cheap but then this is the best bar in the world, plus the photo ops around the hotel are next level. A great place to take out-of- towners to impress, especially those who love a social media brag!