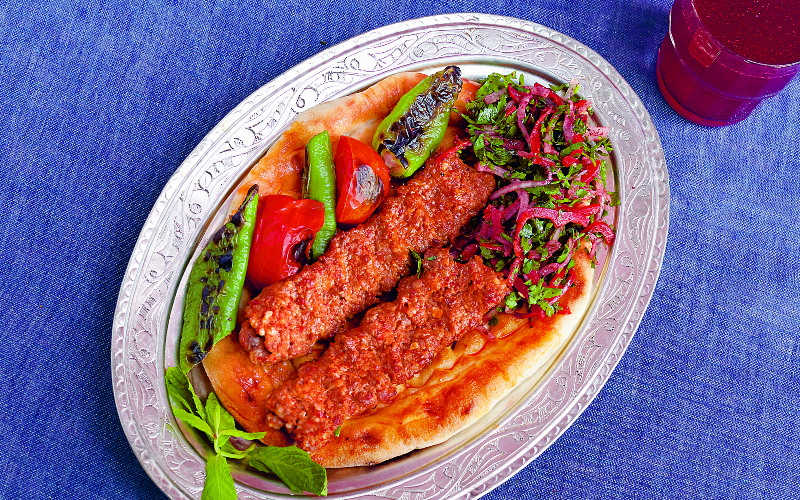 We LOVE a good kebab though it’s not something we normally make at home, but now that Musa Dagdeviren (who you may have seen on Chef’s Table) has released The Turkish Cookbook, it’s something we’re going to be doing more often as this spicy kofte or Adana kebab really isn’t difficult to master. The recipe does specify using a zurh or curved cleaver to finely chop the lamb meat but if you don’t have one, ask a butcher to mince it for you. These’ll taste better cooked on a barbecue, using long cast-iron skewers, but if, like us, you don’t have enough outside space for a proper BBQ and don’t fancy attempting these on a disposable one, you can do them in the kitchen. Just use 10 wooden skewers and make sure you soak them first.

What You Need, Serves 4

For the kebab mixture

1. Start with the kebabs. Mix the onion, chilli , dried chilli flakes, black pepper, cumin and salt in a large bowl for 1 minute, until well combined. Add the lamb shoulder, brisket and tail fat or ghee and gently mix for 5 minutes. Cover and chill in the fridge for 10 minutes.

2. Make the salsa by mixing the onion, red bell pepper, parsley, sumac, mint, tomatoes, olive oil and salt in a large bowl for 2 minutes. Chill in the refrigerator until ready to serve.

3. Take the kebab mixture out of the fridge. Divide the mixture into 8 pieces and mould each piece onto a skewer, making a flattened roll about 10cm long, squeezing the two ends firmly. Thread the banana peppers onto two skewers. Grill for 5-6 minutes on each side, turning as required.

We tried two methods for cooking the kebabs – on a griddle pan on the hob and under the grill in the oven. We recommend the former as it’s much easier to control the cooking and turning, and there’s way less chance you’ll smoke out your kitchen.

4. Grill the flatbreads for two minutes, turning every 30 seconds, and then quarter them to serve, along with the meat, peppers and salsa.

For more Turkish recipes, check out The Turkish Cookbook by Musa Dağdeviren, Phaidon Press here. Do tag us in your photos with #loticooks and we will showcase the best ones on our feed.