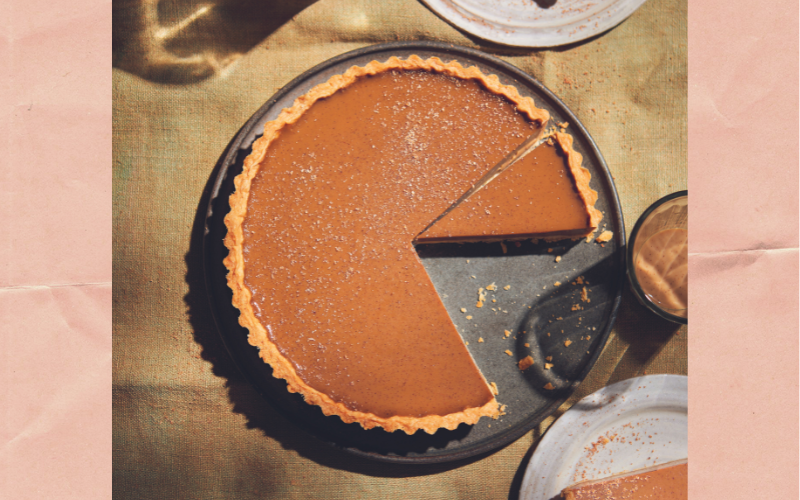 Award-winning food writer and activist Melissa Thompson has just released her debut cookbook, Motherland: A Jamaican Cookbook to coincide with the 60th anniversary of Jamaican Independence. The book is full of research on the country’s history and the way that has shaped the island’s cuisine as well as classic recipes and Melissa’s twists on popular dishes, like this Guinness Punch Pie.

Melissa explains where the idea for the dish came from, “If you like custard tarts, you will love this. I first had the idea for it a few years ago, while drinking some Guinness punch and wondering if it would translate into dessert form. The answer was a resounding yes. The flavours work really well in a tart and you can adjust the intensity of the Guinness flavour by using slightly less or more. And if you don’t drink alcohol you can use 0% Guinness: it works, I’ve tried.”

“Stout is a really popular drink in Jamaica, with Guinness and Dragon Stout cornering the market. Guinness followed the British Empire – it is also huge in Nigeria – and the company first exported a West Indian porter from Dublin to the island in 1801, with the first export of proper Guinness going out in 1830. Its long-standing history on the island is immortalised in Guinness Punch and this tart takes on those flavours beautifully. The slight bitterness of stout is softened by sweetness here, while the spices in the custard are really reminiscent of the stout itself. The tart makes a brilliant centrepiece, and will bring smiles of contentment to fans of the drink, as well as to everyone else.”

1. In a saucepan, simmer the Guinness until it reduces by about two-thirds. Leave to cool.

2. Meanwhile make the pastry. Using your hands, rub the butter and flour together until the mix resembles breadcrumbs. Mix in the sugar and egg yolk and then add the measured water a little bit at a time, until the dough comes together. Don’t knead any more, just wrap in cling film or greaseproof paper and refrigerate for 30 minutes.

3. Preheat the oven to 160°C/fan 140°C/Gas Mark 3. Butter a 20cm tart tin and remove the pastry from the fridge. Dust your worktop with flour and roll out the pastry into a circle roughly 28cm in diameter. Coil the pastry around the rolling pin and uncoil over the tart tin. Carefully push the pastry into the corners of the tin and leave the edges rising above the edge.

5. In a bowl, gently beat the egg yolks with the condensed milk, trying not to get too much air or too many bubbles into the mix. Stir in the double cream and reduced Guinness, then stir in the remaining ingredients.

6. Pour the custard into the pastry case and bake for 40–45 minutes; it should still have a wobble in the middle. Remove and leave to cool.

7. Grate extra nutmeg over the top and chill before slicing.