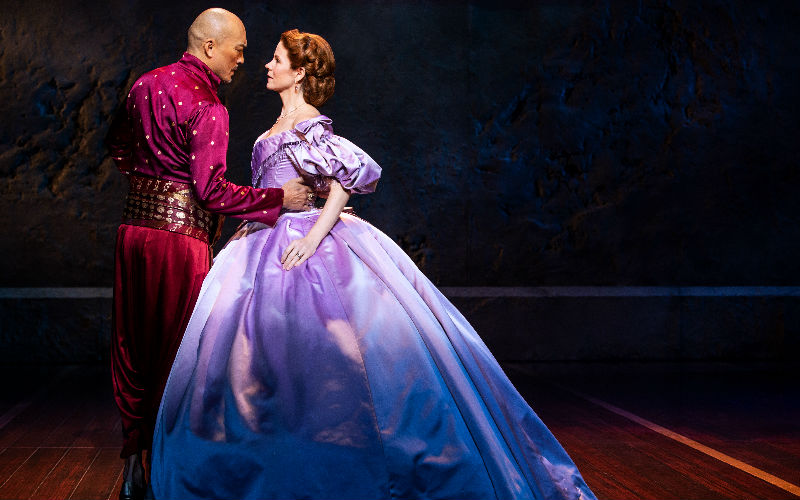 Get ready to whistle a happy tune, because The King And I has returned to the West End. Following an acclaimed, Tony Award-winning run on Broadway, the Rodgers & Hammerstein classic has transferred to the Palladium Theatre, with three of the original Lincoln Center Theater lead actors reprising their roles: Broadway Musical Royalty Kelli O’Hara, reprising her Tony Award-winning role of Anna Leonowens and film star, Oscar and Tony nominee (for his role on The King and I) Ken Watanabe in the title role of The King of Siam. Another notable addition to the cast is Takao Osawa, multi-award-winning actor and star of one of Japan’s most popular television series, JIN, who joins the cast of The King And I to play The Kralahome, trusted adviser to The King of Siam.

Set in 1860s Bangkok, the musical tells the story of the unconventional and tempestuous relationship that develops between the King of Siam and Anna Leonowens, a British schoolteacher whom the King brings to Siam to tutor his many wives and children. While the source material was somewhat progressive when it debuted in 1951, it’s difficult, in 2018, to get past that nagging little voice in your head pointing out all the problematic themes and mixed messages the show espouses. It strikes blows against the idea of colonialism one moment, while endorsing the idea of the “civilising” influence of the West the next. And you’ll be hard pressed not to recognise the parallels to current events as the King ponders whether his country should form strong alliances or strike out on its own, and how to hold on to the traditional in a rapidly-changing, modern world. That we’re still struggling with these questions today is a puzzlement, indeed.

All that being said, there’s a lot to love about this production, which mitigates some of the aforementioned issues in its adaptation with a wildly talented and appropriately diverse cast, and staging that is opulent without overly exoticising the Siamese court. The mood is set from the moment you enter the house, with a gorgeous front curtain made from 250 metres of gold leaf, and moving set pieces that dazzle without ever feeling overworked. The show is beautifully acted and sung, with each of the performers bringing depth to characters that can easily fall into the trap of feeling one-dimensional and stereotypical. O’Hara’s Anna is at once both spirited and kind-natured, genuinely funny and deeply affecting, with the actress breathing new life into classics like Getting to Know You and Hello, Young Lovers. Watanabe makes the character of The King his own (a none-too-simple task for a role that is almost synonymous with original actor, Yul Brynner), and is in equal parts commanding and affable. He is eccentric and slightly manic at times, and infinitely more likable than the character has any right to be, which makes it easy to overlook the fact that he’s not the most technically adept singer. The rest of the cast shines as well, with a particular highlight being Na-Young Jeon’s outstanding rendition of My Lord And Master, which elicited audible gasps from the audience as the song reached its crescendo.

The performances and staging make this revival of The King And I something wonderful, indeed. Every note’s hit, every joke lands, and every moment comes as close to perfection as is possible for the oftentimes problematic source material to be. If you’re anything like us, you’ll be breaking out your flouncy skirt and asking Shall We Dance? by the end.