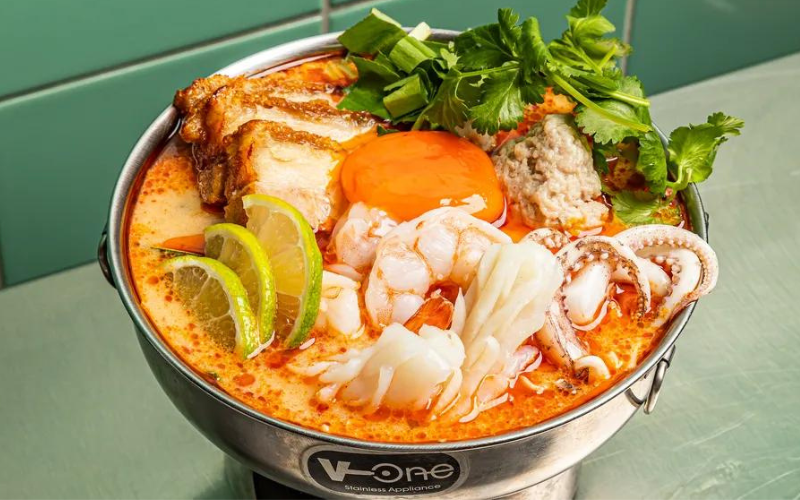 Ask a chef what’s their favourite cuisine, and chances are the reply would be Thai. It’s the industry’s long-time beloved, some of the city’s best chefs specialise in Thai food and we all know someone who’s had a “life-changing” month or two travelling in Thailand (they probably live in that part of town where flat caps abound). If you want the real thing, you can check out our three week Thai-tinerary but, of course, there are some fantastic Thai restaurants right here in London. Among the many, there’s the properly authentic (101 Thai Kitchen and Singburi), the edgy and contemporary (Som Saa, Smoking Goat and Kiln) and those ones that are always a sure call when you want a curry that’s going to hit the nail on the head (Burning Rose and Supawan).

But could there be a new wave emerging? Before now, London’s Thai spots were relatively understated. Some were small and cash-only, some undersung and some stuck to a strict colour scheme of black, brown and grey. This year has brought an influx of new joints all over the country – not just in London. And while they aren’t exactly flashy or gauche, there’s certainly been a shift in energy.

One of the best openings of the year was Luke Farrell’s Plaza Khao Gaeng, a place so vibrant that you can practically taste the colours – or maybe that’s the miang phuket – and you immediately forget that you’re somewhere near the arse-end of Oxford Street. And its sibling site, Speedboat Bar, can be summed up by the immortal word of Adore Delano – “party.” There’s very good food and a very good time to be had at both.

Head west and you’ll find the UK’s answer to LA’s cult NIGHT+MARKET, Chet’s. With a less traditional menu than that of those just mentioned, but repping that same vibe shift, Chet’s was created in collaboration with the N+M’s founder Kris Yenbamroong to blend Americana with Thai flavours in bold ways. Post-Holborn pop-up, the concept recently became The Hoxton, Shepherd’s Bush’s in-house restaurant.

It doesn’t stop there, because we can expect even more to open up in the coming months. David Thompson, *the* BNOC (when campus = Thai food scene), is set to launch new restaurant Long Chim in Chinatown, ten short years after the closure of his legendary Belgravia Thai restaurant Nahm. The British-Thai kitchen concept run by husband and wife team John and Desiree Chantarasak, AngloThai, is getting its first proper restaurant after a couple of years of exceptional pop-ups and meal kits. And Arcade Food Hall (its Oxford Street location is the current home of Plaza) is setting up a second shop in Battersea Power Station next year, with another (as-yet-unnamed) Thai restaurant – more on that as we get it.

Thai has always been and will remain a staple of our diets as Londoners with some of the best restaurants outside of Bangkok or Chiang Mai at the other end of a bus trip, and we love seeing fresh ideas and restaurateurs getting more and more creative. But, at the end of the day, new wave, old wave or somewhere in between, it doesn’t really matter to us. Put some larb or weeping tiger on the menu and we’ll be there.