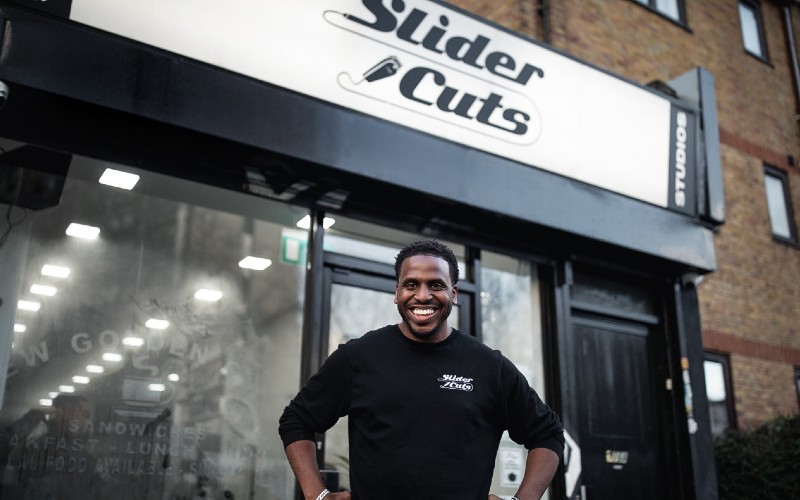 SliderCuts is next up in our Local Heroes series where we big up the people, small businesses and neighbourhood spots that make London great. The Hackney Road barbershop was founded by Mark Maciver, who counts the likes of Anthony Joshua, Stormzy, Tinie Tempah, Reggie Yates and Dizzee Rascal amongst his clients and who has been recognised as one of the top Black business people in the UK having won a Black British Business Award and been nominated for the Evening Standard Business Awards.

Mark caught the barbering bug young after watching people get their hair cut on TV. “I always used to get my hair cut by my mum and had always dreamt that I could get my haircut by a professional like I could see on TV. When I was around 13, 14 and I still hadn’t one of those haircuts, I decided to pick up the clippers and try it myself because I was desperate for a good haircut – no offence to my mum… and that’s how I started my career,” he says. “I did mess it up the first couple of times, but I didn’t have any money to get it done professionally so I continued cutting my own hair and progressively got better.”

Though he’s honed his cutting skills to a fine art now thanks to more than 20 years in the game, Mark isn’t just about giving a good trim. With SliderCuts he’s created a space for his community and a place where young people can find work. “I created SliderCuts because I felt like there was a space and a way that a shop should be run that I just didn’t see out there and I felt that I could offer something different,” says Mark. “I had a vision of how I wanted to see it, a hair and beauty salon that is a community space, a refuge, a place that will help you feel good and an environment that allows you to have friendly debates about things going on around you. I wanted the space to be a second home to people.”

That idea of the barbershop functioning as a safe space, especially as a safe space for men to talk, is very important to Mark. “It’s a space that men come to talk, vent, discuss and put their feelings out there in a more honest way than they probably do in most places – even their homes. Everyone needs a space where they can be free, and be themselves, and you know, get what’s on their mind out there or you end up holding it in, which will end up causing external problems because you are holding onto everything.” As well as using SliderCuts to allow people to connect with each other, Mark is also passionate about using the shop to help the younger generation get a foot in the door and he does that through his two work schemes.

“One of them is apprenticeship scheme that we get young people that are trying to learn the barbering skill in and working at the shop while attending college a couple of times a week, so mixing the practical and theory and they receive a qualification at the end. We also offer them a full-time job at the end,” he explains. “We also run a ‘runners’ programme for people between the ages of 13-16 teaching them basic life skills, work experience and giving them their first pay cheque. This consists of them coming to work for us on a Saturday, and when it’s the school holidays they come in a bit more frequently. We teach them how to count money, do stock checks, clean up, get food and we mentor them. When they are 16 we help them and support them in whatever career they want to go into.”

In fact, Mark is so passionate about helping and inspiring people that he’s even written a book called Shaping Up Culture, which came from “initially trying to help people from my community after hearing about the issues and things that they are going through and feeling like I was fortunate enough to be someone who has overcome the very same things and come out the other side. Knowing all the things that I saw both myself and other people tending to get wrong, I thought I’d write a book to help someone like myself, my peers, my community to grow.” In it he covers topics like how to shift your mentality, how to unlearn things that you may have been taught culturally and how to set up a business. He’s made sure it’s accessible too by pricing it at just £5, “and if you can’t afford it and you wanted it, I would happily give it to you,” he says.

He’s sold out the first edition of the book and is going in for a second, and he’s won awards but it’s helping people get work that has been the biggest achievement for Mark. As he says, “something which I’m probably most proud of is being able to provide jobs for now, 16 people, which means being part of their life journey – buying houses, getting married. I love the idea of being able to provide opportunities for people to get what they want out of life.”

Mark is keen to share the local love by shouting out Original Flava, “who have great recipes, great food, great content, they also have a cookbook out and share how to’s with recipes on their Instagram which I think is really useful”; Black Eats LDN, who’s “built a space where you can get good African and Carribean food all in one space, and with a mission that helps other businesses out by providing a platform to showcase what they offer”; and his wife, the artist Lakwena, who has “travelled all around the world painting murals on walls from LA to Miami, Vienna to Brazil and more. She’s worked with huge brands like Clinique, Nike, Facebook and Instagram, built her own studio with a team of people now working for her and she’s built this all from nothing.”