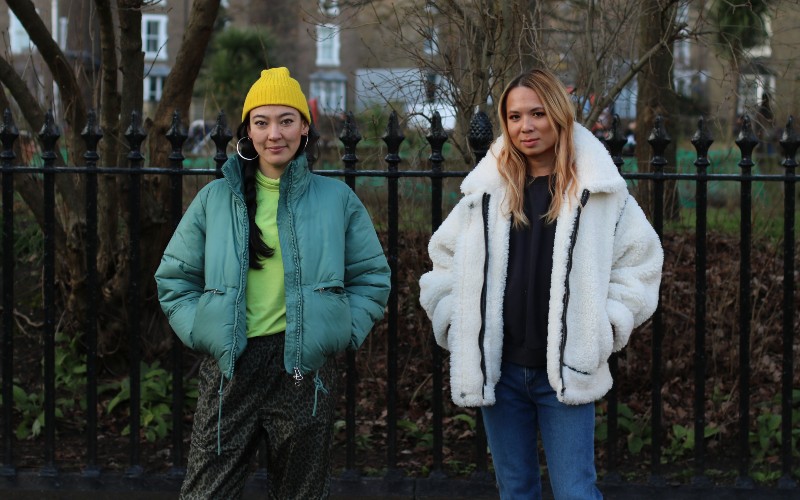 Next up in our Local Heroes series, where we big up the people, small businesses and neighbourhood spots that make London great, is Sachiko & Shu aka Claire Sachiko Fourel and Lex Shu Chan, two Londoners who run events, supper clubs and storytelling experiences, and who are taking a stand against Asian hate crime with their cookbook project Recipes Against Racism.

The pair met in law school in 2006 and bonded over a love of food and a shared experience of being third culture kids – Lex is Canadian born, grew up between Canada and Hong Kong, and educated in Britain, and Claire is French-Japanese-American, born in London and educated in France, which the women say, “conditioned us to be able to make anywhere our home and build communities wherever we found ourselves.” As Sachiko & Shu, they work to “create inclusive experiences based on community and collectivism, and of course to tell a different story each time through shared experiences.”

The rise in anti-Asian hate crime since the start of the pandemic – some parts of the UK saw almost a threefold increase in hate crimes against people of ESEA heritage and there were fatal shootings in Atlanta in March 2021 where six of the victims were Asian women – coupled with the duo’s own experiences of racism and microagressions, plus their work on social justice and diversity in their law careers inspired them “to use our skills and networks to highlight the racial injustices which have been perpetrated against our communities, while bringing people together through our love of food, creating communities and positive shared experiences.”

The result was Recipes Against Racism, a charity e-cookbook featuring recipes from Asian and Asian-influenced restaurants in London, with proceeds going to two the not-for-profit organisations Stop Hate UK and End the Virus of Racism. The pair chose a cookbook as the medium for their project because “cooking can be a letter of love for a culture”. As they say, “dinner parties and restaurants are theatres in themselves and are a great medium to tell stories, whether it’s about your personal cultural heritage or your way of telling the story of a cuisine that you honour and respect. For us, this is where the message of ‘love us like you love our food’ comes in: if we consume food and culture, have we taken the time to understand where the dish has come from and to learn about the people who originated it, particularly if they face discrimination?”

After contacting restaurants and supperclubs that they love, Claire and Lex got a great response with the likes of Poon’s, Kiln, Chen’s Table, Sarap, Farang, Bian Dang, Lucky & Joy, and Sollip all contributing recipes.”The fact that so many took the time out of their schedules to donate a recipe and share their stories about their cuisine or cultural heritage showed us how many people want to contribute to the anti-racism global movement by uniting through food,” they say. The pair were also keen to make sure that the diversity of Asian cuisine was well represented, “we wanted to ensure that we did not limit participation to just chefs with Asian heritage, as we felt it was important to be inclusive of chefs and business owners from different backgrounds who are allies and support the Asian community and who celebrate Asian cuisine and culture in a positive manner.”

The book is filled with great recipes and both women are keen not to play favourites, but Claire highlights the Oyako Donburi and the Taiwanese Minced Pork with Chishang Rice as “it’s similar to something my mother made growing up (even though she isn’t Taiwanese!)” while Lex has been “craving the jiaozi from Chen’s Table and the claypot rice from Poon’s. I haven’t visited my grandparents in Hong Kong for a while, and these are both recipes which remind me of home and which I find incredibly comforting.”

As well as fostering a sense of connection after what has been an isolating year and promoting a positive narrative in the face of hate, the goal of Recipes Against Racism was to “create meaningful change by directing the proceeds towards addressing both the immediate needs of the Asian community as well as longer term strategic aims which will benefit the community far beyond the life of this project.” It’s certainly been a success, with Claire and Lex now hoping to do an international version of it and a physical cookbook too. Aside from purchasing the book and supporting the charities, the pair want be people to be aware of what happens to the Asian community on a daily basis, as they say, “calling out insidious narratives in the press that links reports around Covid to people who look Asian in stock photographs for example. Calling in, or indeed calling out in a safe way, instances of micro-aggressions or outright racism if you witness any and being an ally can be incredibly powerful.”

Claire and Lex featured London-based restaurants and chefs in the cookbook as well as charity partners End The Virus of Racism and Stop Hate UK but they also want to give a shout out to Happy Endings, “who make the best ice cream sandwiches this side of the Atlantic and are always innovating with their flavour combos. They also seem like they have a fab people culture, which might explain why their products are just so sweet!”