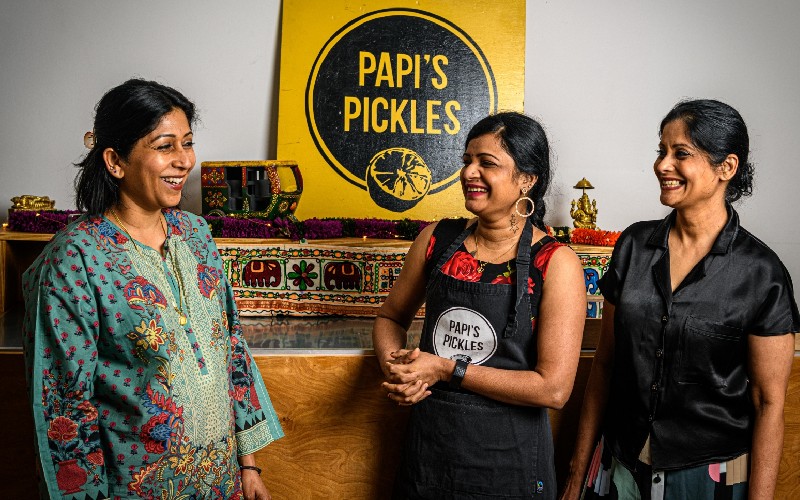 Local Heroes is a series where we big up the people, small businesses and neighbourhood spots that make London great, and next up is Papi’s Pickles, a social enterprise that produces Sri Lankan and South Indian food cooked by women from these communities who have relocated to the UK due to conflict in their home regions.

Founder Abi Ramanan, who had been a campaigner at the Fairtrade Foundation, Oxfam GB and Sustain, was inspired to do something after meeting a Sri Lankan Tamil human rights lawyer and learning about the needs of the women who had relocated to London from the conflict in Sri Lanka. “Female refugees and migrant workers are particularly vulnerable to exploitation and remain far from safe and secure employment, so achieving any form of economic independence is deeply challenging,” says Abi. “So in 2014, together with my mum Shanthini, and aunt, Radhika, I founded Papi’s Pickles in 2014 with the purpose of empowering women who had relocated to the UK due to the ongoing civil war in Sri Lanka, by welcoming them into a familiar community, offering a safe working environment, a London Living Wage salary, and providing crucial confidence-building opportunities and training.”

Food and cooking is one of strongest ways that migrants and refugees can stay connect to their homelands, and that’s what the women who train at Papi’s Pickles are able to do whilst gaining a range of valuable skills. As Abi says, “for all trainee chefs we provide them with an opportunity for employment, a London living wage income and a safe support network. We also equip women with transferable skills for employment, such as NCASS hygiene training. Furthermore, by enabling and encouraging women to build careers for themselves, we help strengthen their confidence. We aim to help build a fairer and more equal food system through our own practise of sourcing as many ingredients as locally and sustainably as possible.”

The training element is key to the Papi’s Pickles operation and has been recognised with two awards from Unltd. This was a big moment for Abi as it “enabled us to support our trainee chefs in the development of their skills. This meant that the majority of women who had worked with us, were then able to gain further employment after Papi’s Pickles and we count this as one of our most important successes.”

Pickles might be what gave Papi’s Pickles its name – the flavours they make include green apple & fig, tomato & roasted garlic and beetroot & smoked onion – but the company also produce a whole range of dishes, “our masal dosa xomes with a traditional potato filling and is served with sambar and fresh chutney. Sri Lankan mutton rolls is also a hugely popular dish and so is chaat, our unique take on a classic Indian street food dish!” says Abi. Papi’s Pickles serves this food at a whole range of places, from catering events and wedding to running pop-ups at the likes of the Lido Cafe, Maida Hill Place, Brixton Village, Cinnamon Kitchen, and Borough Market. For Abi, “highlights include doing a pop-up at the Conflict Cafe, providing the catering for the TEDx London VIP lunch, catering at events in both the Foreign Office and the Houses of Parliament, and also doing a pop-up at Gordon Ramsay’s Bread Street Kitchen.” They’ve just held a summer brunch at the Omnibus Theatre in Clapham and hope to be doing even more events and pop-ups as the city continues to open back up.

Abi wants to share the love by shouting out some of her fave food businesses, including “Day Old, which focuses on taking surplus baked goods and selling them as treat boxes, with the cash being donated to charities that are tackling child poverty; Fat Macys, which is a social enterprise that uses their restaurants and events catering business to train & support Londoners who are living in temporary accommodation; Snact, who focus on making delicious, gluten-free, vegan fruit jerky from ‘ugly’ fruit; Luminary Bakery, which is a social enterprise providing training and employment opportunities for women who have had social and economic disadvantages; and Be Inclusive Hospitality, a not-for-profit organisation that aims to advance racial equity within the hospitality, food and drink sectors.”