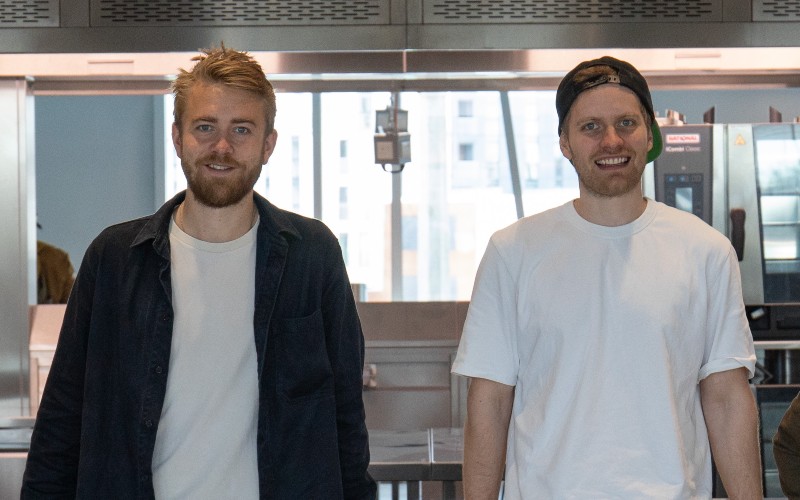 Mission Kitchen is next in our our Local Heroes series, where we big up the people, small businesses and neighbourhood spots that make London great. Co-founded by Charlie Gent, Chris Lumsden and Paul Smyth, it’s a 16,000 sq ft ‘light kitchen’, a shared workspace for food founders, offering members access to commercial kitchens as well as office and event spaces, that has “been designed to help reduce the barriers to entry for small food businesses and help early stage ideas grow more quickly and sustainably.”

Charlie had the idea about five years ago, after starting a side-hustle making artisan bacon and wanting to turn it into a proper business. “I was living in a shared flat with two housemates and the idea of curing pork belly for weeks in our shared kitchen didn’t seem like it was going to work! Given the number of aspiring food entrepreneurs in London, I assumed there would be somewhere I could go to get started,” he says. “But when I went looking I couldn’t find what I was looking for. A bit of research showed that there was an established model for kitchen incubators and shared kitchens in the USA. So I decided to build the thing I needed.”

With experience in the world of shared workspaces, he teamed up with Chris Lumsden, “an ex-hospitality GM who brought the expertise around site management and kitchen operations” and Paul Smyth who “has a background in the design and operations of specialist workspace projects designed to support entrepreneurs in other industries” to make Mission Kitchen happen.

The history of New Covent Garden Market and the availability of fresh produce that it provides was one of the reasons that Charlie and Chris chose to base Mission Kitchen there but there pair are also excited by the future plans for the area, “the market is undergoing a huge redevelopment with a vision to become London’s central hub for food industry and enterprise. The market is working with local partners to establish the Nine Elms area as London’s food and horticulture quarter, so we’re excited to be part of that over the coming years.”

The space has 30 Founding Members, whittled down from over 200 applications, including craft hot sauce brand Moi Moi Sauce; nibs etc who make snacks from fruit pulp waste; Momo’s Dairy, run by Syrian refugee Mohammed Abu Zard; and Mama Ley’s, a not-for-profit initiative that develops healthy meals for low-income families in South London. The pair were very keen to get the right first cohort for Mission Kitchen so they prioritised businesses and entrepreneurs who were from under-represented groups (more than 70% of the Founding Members are BAME or female-led), who were committed to sustainability and who were keen to be a part of a community of food entrepreneurs, as well as picking people who would benefit from the equipment and services the space offers, and the support available after such a challenging 18 months.

As it did for almost every other sector, “the pandemic caused chaos in the food industry” but Charlie and Chris are quick to find the upshot, “it drove a revolution in entrepreneurship and innovation. More than half of our Founding Members started their businesses during the pandemic.” Not only did furloughs and redundancies push people into experimenting with their own projects, the pandemic caused a shift in food business models away from restaurants and markets, which were closed, and towards direct-to-consumer online sales. “This provides an entirely new way to start and grow a food concept and, even after the pandemic, this new channel and consumer behaviour has remained,” says the pair. “This will become a lasting and important route for people to get food concepts off the ground quickly and without major investment – and it’s an area we are very focussed on.”

The Founding Members have been established and Mission Kitchen is now in the soft launch phase but Charlie and Chris are already looking forward; the next round of applications for members to join opens in late August and then “later in the year we are hoping the easing of restrictions will allow us to start delivering more in terms of public events and training and education programmes. Longer term, we are looking at other opportunities, in London and further afield, where there are communities of food businesses who need the kind of support we offer. We would love to create more Mission Kitchen sites over the coming years, wherever they are needed.”

And of course they want to give some shout outs to other people doing important things in food, namely Counter Talk, KERB, Wildfarmed Grain, Electric Mayonnaise, and No Mise En Plastic.