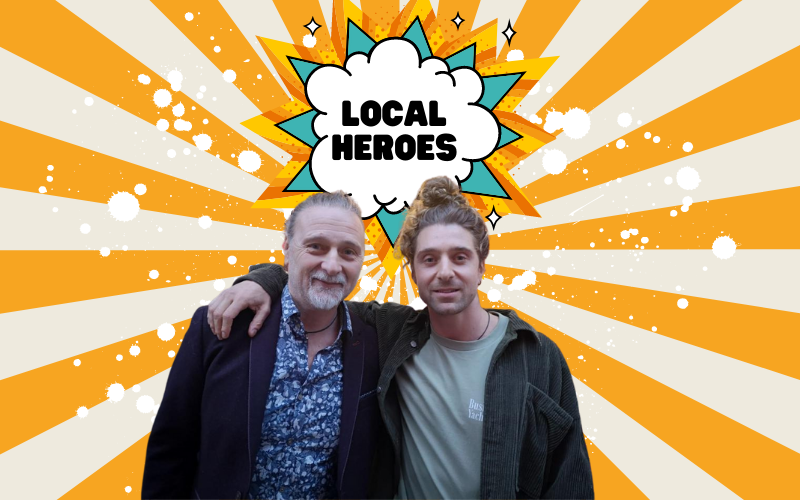 Next up in our Local Heroes series, where we big up the people, small businesses and neighbourhood spots that make London great is Metal Morphosis, the piercing biz that’s been blinging up various body parts of Londoners for over 30 years and has pierced everyone from Kate Moss to Keith Flint (the septum was a Metal Morphosis job).

Run by Ben Harris and his dad Matthew, Metal Morphosis has just opened a new piercing studio in Soho, taking the business back to the neighbourhood where it all began. It started way back in 1991 with Ben’s pharmacist granddad and market trader dad. “My dad was flogging jewellery in the markets and customers were asking if he would pierce the jewellery he was selling. He then saw a gap in the market, leant on my granddad’s medical background and that’s when Metal Morphosis was born,” explains Ben. He got involved after completing a business degree with the aim of taking the piercing studio to a new level. “Commercialise the brand and body piercing as a whole, feature as a concession in high street stores, and really lean on the brand heritage and use that to our advantage to resource consumers that we are the number one destination for piercing. That was my mission!” he states.

Metal Morphosis has a shop on Hackney Road and until recently, had a very successful presence inside Topshop on Oxford Street. As Ben says, “I managed to get a pop-up in Topshop with a piercing pod just doing ear piercing, on a trial basis doing 50 piercings a week. Speed up to 2019 (just before lockdown), we had five studios and were doing 500 piercings a week and were where many celebrities and high profile people came to get their piercings.” However the pandemic really hit Metal Morphosis hard, because they operate as a physical presence business – they had no online shop when lockdown started so revenue disappeared overnight – and because Topshop went into administration. “We were forced to clear the concession out in two days. It was a sad and scary situation for us as the business was on the line. I think in the back of our mind everyone always thought that the Topshop Oxford Circus branch was such an iconic store that it would remain,” he says.

But when one door closes another one opens, and this one opened in Soho. “Losing Topshop we quickly had to find a new W1 premise to house all our loyal customers as we were getting an abundance of emails and calls about where we are going to be located next,” says Ben. “Skipping forward two years, I’d say it was the best thing that has happened to us as we now have our standalone presence again in Soho where it all began for us.” Time may have passed since they were last in the neighbourhood but for Ben, the draw of Soho is still the people, “we started in Soho because at that point it was the cultural creative centre of London and everything exciting was coming out of Soho. It was and is one place where people could be accepted for who they are and could try new things with their bodies and not be judged.” And the feeling is clearly mutual – when they held a launch event for the new shop there were queues around the corner and it’s been doing a brisk trade ever since.

Given that they’ve been going for three decades, Metal Morphosis has seen it all in terms of piercing. “Early 90s was all about belly button piercings after Naomi Campbell and Madonna, then it moved into eyebrows in the mid 90s, and the late 90s were all about nipples. Mel B getting her tongue pierced in the early 2000s projected tongue piercings into the limelight and we really saw the trend kick off,” says Ben. “In the last couple of years it’s all been about the septums and now the focus is all ears. Like fashion, piercing goes through waves and always comes back around – we think navels will be the next big thing again in 2023.”

As well as predicting the next big piercing trend, Ben wants to share the local love and shout other indie businesses including “Amber Jean wigs, Gaffa magazine, Sticker Studios and War Paint, who are doing cool things in their spaces and breaking barriers in London.”