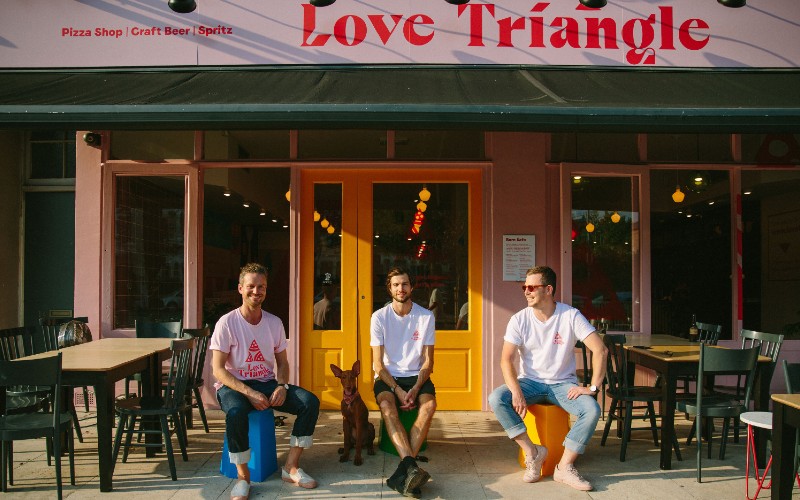 Next in our Local Heroes series, where we big up the people, small businesses and neighbourhood spots that make London great, is Love Triangle. Like fellow slice slingers and Local Heroes Short Road Pizza, Love Triangle is a pizza shop in Balham that donates a meal to Wandsworth Food Bank for every pizza sold.

Love Triangle was created during the first lockdown of 2020 by friends Ben Mason, Will Griffiths and Tyson Benton as they all saw their livelihoods disappearing in the face of a national shutdown. As Ben says, “the country was all having the same conversation: what’s coming next? And all three of our livelihoods were about to disappear. We happened to hear about an empty restaurant with a pizza oven in it. I also happened to be reading about food bank usage spiking at the time. We knew that food delivery would be important in lockdown. So the idea just fell into place. What if we could open a delivery-first pizza shop that gave a meal to a food bank for every pizza sold? We might be able to look after ourselves, and help out with the pandemic a bit too.”

Love Triangle serves up triple-fermented Neapolitan-style pizzas with toppings including ‘nduja & fennel, courgette & pancetta, and roasted mushroom & vegan mozzarella alongside burrata with pea salad, tiramisu, spritzes, Gipsy Hill and Brixton Brewery beers, and Uncharted wines. Setting up a new food business under normal circumstances is hard enough, so pulling it off in the middle of a pandemic is quite the achievement.

That extra stress and pressure only seemed to spur the guys on. “There was a tremendous sense of community spirit, a universal desire to help. So that motivated us hugely…The practicalities were hard, of course, but that’s always the case with a new business. In this scenario the desire to succeed was greater than ever before. It was all or nothing. And it was also amazing to have a focus during lockdown one, to be creating something amidst all the destruction,” says Ben. “Once we opened, things have mostly been positive. The tougher the restrictions, the better we’ve done, and the more meals we’ve donated to the food bank.”

In the first four months of being open, Love Triangle has delivered 10,000 meals to Wandsworth Food Bank, which is a testament to them and to the spirit and strength of their local Balham community. As Ben says, “we’re on a small parade of shops, all of which are independent businesses. And the locals have been so supportive from day one. They’ve bought our pizza, told their friends about it, talked about us on social. And also been very forgiving when we had some wobbles in the first couple of weeks. In a year of community spirit, we’ve had that as fuel for our fire”.

The success of the Balham restaurant, both in terms of the quality of the pizza and the fact that customers are able to support the local food bank at the same, means that the guys are already looking at expansion. Ben is optimistic about what the next year holds, “we seem to have landed upon an idea that’s right for this era. So we’re keen to open the next Love Triangle as soon as we can. Can we open two within year one? With very supportive customers, and an excited team, anything is possible.”

As Ben says, “we’re living through a health crisis, an economic crisis and a psychological crisis all wrapped up as one…it feels like you need to bring more than just commerce to the table these days. You need to be helping society too”, so he’s giving a shout out to Common Sanity hot sauce, which raises money for mental health charities and is run by one of the Love Triangle chefs.