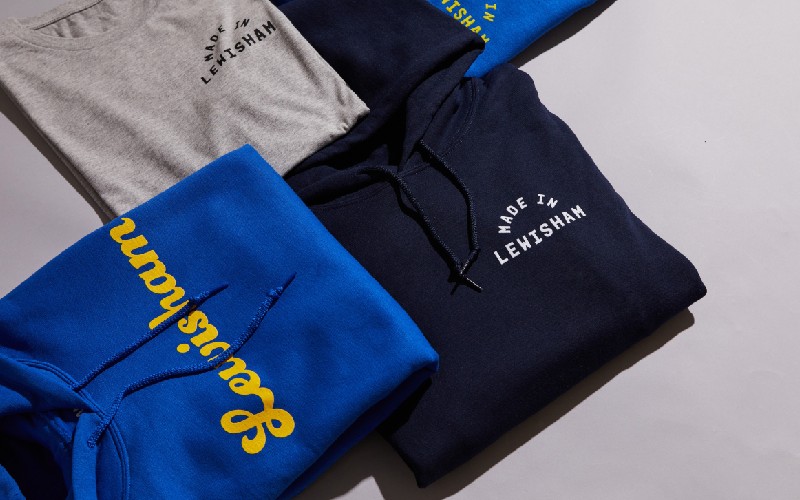 Next up in our Local Heroes series, where we big up the people, small businesses and neighbourhood spots that make London great, is House of Lewisham, which the team describe as a “hyper-local online department store”. It’s run by a collective of Londoners who work with local people and businesses to create products that represent and celebrate the borough and support the community at the same time – House of Lewisham donates a portion of their income to good causes like The 999 Club, Sickle Cell Society, Lewisham Food Bank and the Evelyn Community Store.

House of Lewisham may focus on the borough but the brand grew from something even more local than that – the House of Catford. “Both our outlets are powered by Team Catford, which delivers community engagement for the Catford town centre regeneration on behalf of Lewisham Council, and people kept asking where the Catford slogan sweatshirts our team wear had come from. House of Catford launched and was an immediate success – one first-time entrepreneur we stocked first is now in Liberty and Zara Home! When people from other parts of the borough started asking for merchandise, we couldn’t refuse and decided to launch the House of Lewisham, too,” explains the team. “Now we celebrate the whole borough, giving a unique outlet for creative Lewishamites including Brockley Brewery, Good & Proper Tea, Pat & Pinky’s, Mont 58, Catford Dogs and Sophie Home. All of these amazing businesses have worked with us to create exclusive collaborations.”

As you’d expect from such a place-specific organisation, local pride is a key element of the House of Lewisham’s success. The Made in Lewisham jumper is a best-seller and is repped by notable figures from the area. “Incredible breakthrough novelist, Caleb Azumah Nelson, bought one to wear for Penguin’s official launch of his south east London-set novel, Open Water. Caleb had seen Queenie author Candice Carty-Williams wearing one, and said he had to have one for the big day. We were really proud,” says the team.

And this local love has only intensified with people staying much closer to home during the various lockdowns over the past year, as the team says, “as more people are shopping and staying locally we’ve seen a huge increase in sales and interest from the local community. We’ve also seen a rise in people that have a connection to the area but because of the pandemic can’t be here.  We often send ‘care packages’ abroad to people who which include proper teabags!”

The recently-launched Lewisham Cookbook (inspired by the success of the Catford Cookbook) is another showcase for the local community – it features recipes from people across the area, accompanied by images from locally-based illustrator Nancy Ellis. “Every recipe featured in the book was chosen after speaking with local people about the meals they create and their cultural significance. We spoke to community leaders to make sure we were getting the dishes right, as the idea was to help every reader learn more about the people with whom they share this part of south east London and their lives,” explains the team. “We have everything from the national dishes from Nigeria, to the dishes eaten by the Jewish community before the Yom Kippur fast, and recipes shared by the borough’s Romani community. Some of the most moving recipe-gathering involved speaking with some of the Syrian refugees now living in the borough.”

And it’s all go for the team in terms of products, “we try to launch a new product or range every month – it can be tiring, but it’s worth it to support our great local causes.” Naturally as a hyper-local South East London-based business, the House of Lewisham have plenty of neighbourhood places they want to shout out, “to name just a few gems, we would say: Catford Mews, Joy’s Vegan Cafe, Good Food, Marvellous Greens and Beans, Vino Social, Liquorsmiths  and our beloved Maggie’s Cafe.”