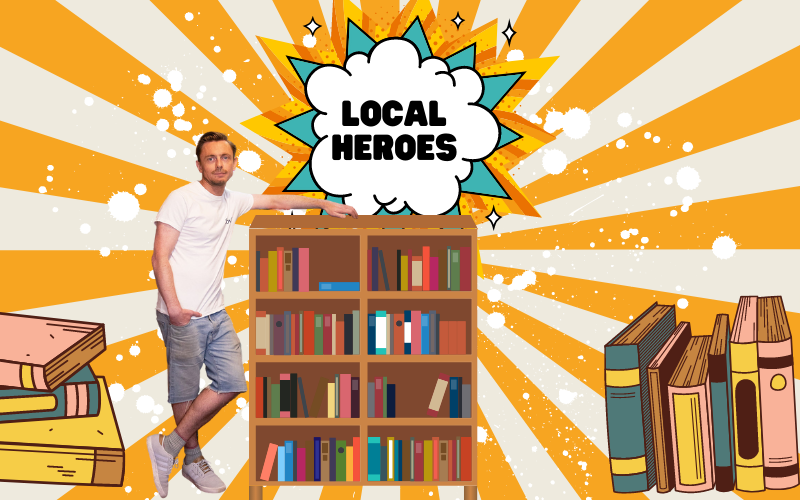 Gay’s The Word, the oldest surviving LGBT+ bookshop in the UK, is next up in our Local Heroes series, where we big up the people, small businesses and neighbourhood spots that make London great. The bookshop was founded in 1979 by a group of left-wing gay socialists, including Ernest Hole, who’d been inspired by the work of Craig Rodwell and the Oscar Wilde Memorial Bookshop in Manhattan (which was founded two years before the Stonewall riots and was the oldest LGBT+ bookshop in the world before it closed in 2009) and wanted to open something similar across the pond.

As Gay’s The Word Deputy Manager Uli Lenart explains, “the bookshop founders chose the name ‘Gay’s The Word’ as a deliberate bold proclamation: as a visibly queer name; it was an articulation of our presence in a climate of erasure. Up until that point, some mainstream bookshops had been resistant about stocking gay-themed books or materials…..This was the opportunity for the UK to have their own space to collate the thinking and the literary output of our community, so the very founding of the bookshop was a political act as well as a literary one.”

Gay’s The Word was designed to be a community space and meeting place as well as a place to find books. “Up until a certain point in the shop history, books occupied only a certain portion of the shop. Of course, queer literature was germinating and many books were being imported from the States, but a significant part of the bookshop (which is a small space!) was devoted to meetings,” says Uli. As well as functioning as a space for people to meet and connect, over the years the shop has played host to a range of discussion and support groups, including Lesbian and Gays Support the Miners, the Black Gay Group and the Disable Gay Group. “I think the Lesbian Discussion Group has been convening in the space (near continuously, Covid permitting) for the last 40 years – they’re about to return to physical meetings. Think of all the women who met their lovers and their sisters in the space, the people whose hearts and minds were nurtured by a sense of community,” says Uli. “Selling books is beautiful, but there’s this whole additional dimension to the community soul of this space, which has always made it very special.”

Opening a queer bookshop in the late 70s was not without its challenges, with prejudice entrenched in society and in the media at the time, and Gay’s The Word was targeted with homophobic graffiti and even bricks through windows. Uli, who’s been working at the shop for 17 years, would see teenagers coming in who’d been thrown out of their home because of their sexuality. Thankfully things have started to change as he explains, “now parents come in with their non-binary, lesbian and gay children. If one takes stock of the cultural and social renaissance around sexuality and difference that we’ve been experiencing, it’s quite extraordinary, although there are still loads of queer homeless youths that are going through the same difficulties, so there’s a lot more to do.”

The history of Gay’s The Word and the refuge it has provided for countless people only underscores the importance of having dedicated LGBT+ bookshops, as well as LGBT+ spaces in general. “Queer bookshops are incredibly important – they are social support centres, harbours of a community. Myself and my colleagues have a great privilege in curating and running the space: we get to see may beautiful moments and there’s a tangibly benign caring energy in the bookshop, which people respond to and value,” says Uli. “If throughout your life you’ve only ever walked into a bookshop and seen books around you that don’t necessarily evoke who you are, and then you come into a space like this – a constellation of thinking from your own community – one cannot over-emphasise the importance of a space like this.”

As well as being able to connect with all the customers that come through the shop doors, Gay’s The Word has also allowed Uli to explore his passions, “I’m passionate about my community, writing, literature and ideas…To spend some time with Tomasz Jedrowski, author of Swimming in the Dark, or to discover a debut author who’s completely blown my mind with their brilliance – like Jon Ransom, author of The Whale Tattoo – I’m the luckiest gay in town!”

And if you’re after recommendations, he’s got a brilliant one for you. “I’ve just read a book called Outrageous! by Paul Baker, all about Section 28 and its impact on education and other areas of society. It’s an incredibly clear-eye account of the background, the institution, the fight-back against and eventual repeal of that act. An insight into the way prejudice can become enshrined with law and the effect that can have on people’s lives.”

Uli also wants to give big shout-outs to some of the other queer venues, including “the other London LGBT+ bookshop in London, The Common Press – Angie is absolutely amazing…to the London Queer Museum, which has found a permanent home in Kings Cross – they’re opening in the spring. We’re incredibly excited that they are opening so close to us. I would like to say queer venues like pubs and clubs have been through the most challenging times with Covid, and it seems like things are abating in a hopefully sustainable way. Venues such as The Eagle (Vauxhall) and The Royal Vauxhall Tavern, and pubs like Retro Bar (off The Strand) are fantastic venues and deserve our support.”