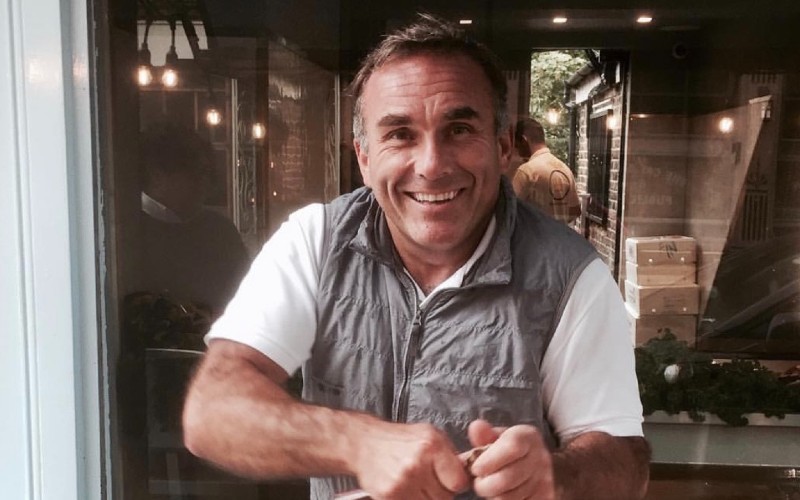 Local Heroes is our series where we big up the people, small businesses and neighbourhood spots that make London great, and now it’s the turn of Hackney fishmongers Fin and Flounder. Owned by Brendan O’Sullivan and based on Broadway Market, the shop sells the highest quality fish and seafood and prides itself on traceability and sustainability – they care where their fish comes from and how it was caught and it shows. As Brendan states, “I am responsible for buying every single fish, oyster and shell that is sold in our beautiful little shop and if it does not make the grade we don’t sell it. I never stop searching for better.”

Although part of a family of food lovers, actually working in the food industry was always just pie in the sky stuff for Brendan. “Over Sunday lunch my kids would often say, ‘you should go on MasterChef Dad’, and of course I should have, after all, I can cook a roast!” he says. “We would discuss business ideas, all food related and most were ridiculous, but then the word ‘fishmonger’ popped up and there it was, or at least I thought it was.” Brendan went searching for a shop on Brodway Market to house a fishmonger business and saw that Fin and Flounder was already in the works.

However in 2014 whilst he was working in construction he noticed that Fin and Flounder was for sale. “Looking in every estate agents window was part of my job.  As I glanced into the window of Urban Estates there it was, the Fin and Flounder was for sale,” explains Brendan. “It was like I had won the lottery and so the journey began.” From there he dived head first into the world of fish, working undercover in Fin and Flounder whilst the sale was going through, “I am a salesmen by nature and the atmosphere in this tiny shop made me feel so alive. It was fast, good fun, hard work, money was going in the till and it had a hundred million miles of potential. I studied the business inside and out, went to fish shops and markets in London and around the world. I soon confessed to the men that worked in the shop, that I was soon to be their boss. Some stayed, some ran, but I learnt a lot from all of them,” he says.

By November 2015, Fin and Flounder was officially Brendan’s and since then he’s established it as one of the best fishmongers in London. “We are really proud of what has been achieved in six years. Our wholesale business has served the likes of both Brats, Brawn, The Marksman, Morito, Rochelle, Lyle’s, Ombra, The Waterhouse Project, in fact its easier to say every great restaurant in East London has used us at some point,” he says. “Street food on Broadway Market has been incredible. Our signature lobster roll and carabinero croquettes have been received so well, it’s just the icing on the cake. And being known for the freshest oysters daily from our tiny bar outside the shop opened while you wait for you fish, it’s a simple service that just makes people happy.”

The pandemic, as it did for virtually every other business, had a big impact on Fin and Flounder but they were able to successfully ride the wave. When restaurants were forced to close the customer side of the business increased as Brendan explains, “because of current times premium fish like turbot, John Dory and the like have become less expensive so its great to hear the kids of Hackney asking for it for their tea. Turbot and alphabet spaghetti will be on my menu.” Then when eating out was allowed again, shop takings shrunk but the wholesale side of the operation opened up again. “It’s incredible to think that almost every chef that shopped with us through the many lockdowns, we are now supplying almost all of them at their restaurants,” says Brendan.

He also took the opportunity to adapt the business, turning the disruption to transport links to his advantage, “we decided that by driving our refrigerated van to deepest Cornwall, almost daily to meet fishermen quayside, we could create our own supply chain bringing stunning fish directly to our door. This continues to be the reason 2020 was a great year for us and 2021 is going to be better. We are certainly one of the lucky ones,” he says.

Fin and Flounder is an integral part of Broadway Market and it’s clear that Brendan wouldn’t have it any other way, “a beautiful market street in a diverse community where the groovy gang are slowly starting to be accepted by the local and with a beautiful park at one end. Where else would you want the fishmongers you love with all your might to be?”