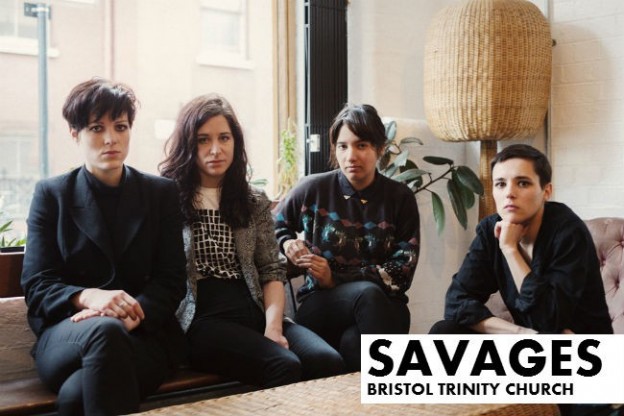 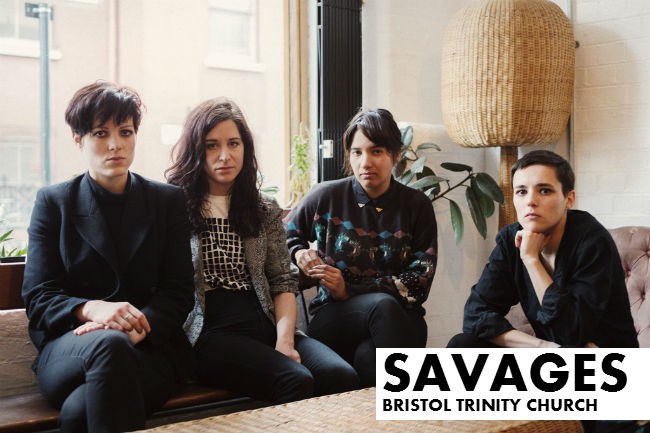 Dressed in black shirts buttoned all the way up, Savages arrive announcing a wall of cold distortion. We’re met with stabbing eye-contact as the cagey guitar of ‘I Am Here’ grapples it’s way through the sold-out crowd like a bitchy hello, very much setting the tone of things to come.

As a venue that housed many punk and new-wave gigs of the 80’s Trinity Centre is the natural choice for tonight. With Savages chiseling away at the strings like a post-punk monster, it’s easy to depict Joy Division passing through the parish doors and letting loose in the same manor some 33 years ago. The crowd behave in the best way possible, carelessly clashing, surfing and diving, it’s right old-school. This is undoubtedly helped by the signs dotted around the venue reading, ‘Let’s make this evening special, silence your phones’. With no breather, the adrenaline is retained as ‘Shut Up’ states the riveting power that these four women carry, each relentless in their approach, with Jehnny Beth inciting an onslaught of chaos just by leaning into the front-row.

It’s been few days since Savages narrowly missed-out on a Mercury Prize Award with ‘Silence Yourself’, but it’s clear that this is a band with an ulterior motive and their priorities lie on the stage. The unmerciful drumming of Fay Milton tirelessly keeps the pace until the first break in proceedings come. During this fleeting halt Beth coyly murmurs, “I don’t mean to make comparisons, but you’re better than London”, this acts as a slice of praise for the stifled hard-working crowd, who lap up the comment, although we all suspect the London crowd were probably told the same having bettered the Brighton lot.

One of the most poignant moments comes when the microphone cable cuts off the vocals and there’s a moment of panic, cool and collected Beth counts in the other members and a thrash of instrumental beauty follows. There’s plenty more suspense packed scenes such as this one, that’s what makes each second gripping. The wired nature of each member punches home a feeling of spontaneity, the breakdown of ‘Hit Me’ offers more psychotic stares and it genuinely appears that someone will be hit. The clunky bass-line of ‘Husbands’ kicks up the biggest wave of turmoil, and the most recognised Savages track calls for security to step-in and earn their money.

Then suddenly, unusual silence rolls into the venue and over a repeated bass-note, we’re told an anecdote, “the other day a friend stayed over my house, when I woke in the morning he was gone, but there was a note on the fridge and it said, don’t let the fuckers get you down”. This preceded the final track, ‘Fuckers’, in which a warped instrumentation is met with howls of euphoric “don’t let the fuckers get you down”. Well if there’s one thing for sure after a night spent in God’s church, it’s that we’re for sure going to hell.