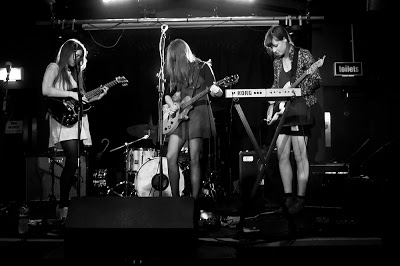 After our recent interview with London’s latest female ambient three-piece. Novella we decided to make an extra special effort to catch them supporting Warm Brains at The Garage with the offering of Not Cool and Warm Brains also on the bill it was even more tempting.

It would appear all eyes were there to see Rory Attwell’s (ex Test-Icicles, Kasms) latest solo project performed under the guise of Warm Brains. Surprisingly this was not the case as Novella took the majority vote according to the entrance tally sheet.

Opening with ‘Oh Brian’, Novella’s debut single named as a tribute to Brian Jonestown Massacre, we were met instantly with lo-fi distorted riffs hewed with a duo of hushed vocals and occasional key-board synth that filled The Garage with a warm fuzz of noise welcoming the audience into Novella’s World of Sound. As Novella moved through the tracks ‘Beach Fatigu’e and ‘No Messin’ the girls switched instruments, each providing their individual vocal melody. Finishing on ‘The ThingsYou Do’ (the second half of their debut single release) the crowd was left keen to know more about what the future holds for Novella.

Next up was ‘Not Cool’, a black metal alternative band from the Southeast who we awaited with high hopes after listening to their tracks en route. However, hearing this live left Not Cool almost living up to their name until they were rescued by their closing track, which was a fantastic ruckus of noise and passion that woke everyone up and left everyone wondering what the hell happened in the 20 minutes prior?

With an audience anticipating a Tom Vek hopes appearance, expectations were high for Rory Attwell’s latest musical-prodigy Warm Brains. The former Test-Icicles front man infused a mass of blood, sweat and tears (ok maybe not so much of the blood…or tears, but a lot of sweat) into the performance of all five tracks that we reeeeally wanted to like it. The genius of the fresh guitar, tight beats and soft female backing vocal was sadly drowned by the depressing lyrics and melancholic vocal of each song which left us feeling a tad disappointed after all of Rory’s efforts and no tom Vek either, rumours eh!

Needless to say Novella stole the show tonight. This gig felt like a showcase of the talent that Rory himself recently helped to record through Brattwell Recordings more than an introduction to his new outfit. Long live the underdog.