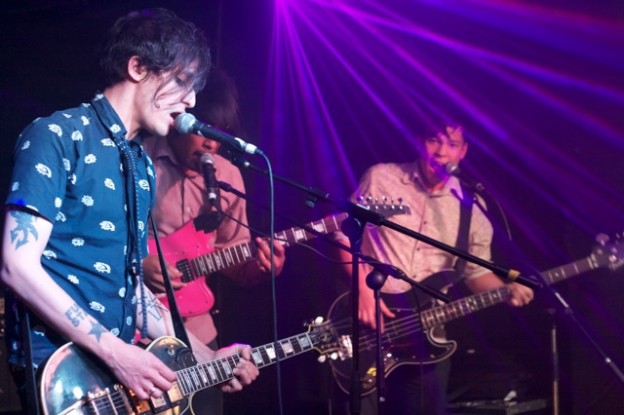 It surprises me that even after the release of their third studio album; ‘D is for W’, Vile Imbeciles still seem to be one of the best kept secrets in contemporary music. From the sombre opening of It Makes You Sad, It is apparent that they have come a long way since their first album ‘Ma’ and may even finally have shaken off woefully inadequate tags such as ‘death-jazz’. The inclusion of Deen Lim on bass and Liam Dowling on guitar and synth, has given the Vile Imbeciles a new dimension.

The chaos and energy are still very much apparent but new tracks such as Apathetic Innocence, Split Your Signature and the dreamy Playing in the Dark showcase their expertise in layering melodies, both vocally and instrumentally. Even so, it is not enough to merely refer to them as a band of technically gifted musicians; they are so much more than twiddly-diddly fingers and dissonant jazz chords. Their ability to switch so seamlessly from the eerie and atmospheric to harsh, crotch-pounding riffs puts them in a league all of their own. This is the sort of music that would give indie lightweights a grey-matter nosebleed and send them home crying out for their Noah and the Whale records.

When Cupid Fucked is as traditional as their song-writing gets, cut from the same stone as older tracks such as Tramp and Suck My Teeth; it is great to see that they can still write a good stomp-along. The extra members have also given Andy and Caspian the freedom to drop their instruments all-together. New song Bertie Lean and a very welcomed cameo of Slack Hands sees the duelling frontmen launch themselves from the stage like an epileptic judder-machine. It can be hard finding the motivation to perform to small crowds, especially on a quiet Monday night in the armpit of East London. With this in mind, The Vile Imbeciles’ dedication is something that can never be questioned.

With their most accomplished album to date finally getting its release, I can only hope that more people acknowledge and embrace their unique style. Get the record, look them up and go and see this band. You will not be disappointed.