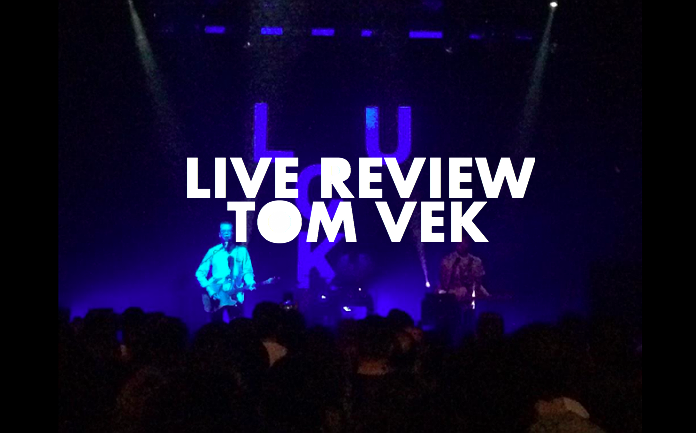 Its been almost 10 years since Tom Vek had indie discos around the country dancing to the sound of his debut album ‘We Have Sound”. After disappearing from the music scene for 6 years he returned in 2011 with ‘Leisure Seizure’ and is now back once again with his recently released album ‘Luck’.

Despite these lengthy pauses between releases he still has an extensive fan base and Wednesday’s gig at Koko was testament to this, with fans on every balcony clambering for a rare view of him performing live. A looped introduction to ‘How Am I Meant to Know’ from ‘Luck’, rings around the venue before he takes to the stage with his band to launch into the full song.

The crowd are treated early to an early hit in the form of ‘C-C (You Set the Fire in Me)’ before he continues showcasing new material with ‘Push Your Luck’ fusing into the Salt ‘n’ Pepa hit ‘Push It Good’ towards the end of the song.

There’s a marked difference between all 3 albums of material and this is even more evident in the live show – the front man plays a funky style of bass on the older tracks, while relying more on electronic bass lines for the more recent releases, with even dubstep and drum’n’bass influences evident in some songs.

The crowd are quite subdued until the stage lights bathe the venue in green and the instantly recognisable chiming synthesiser rings out around the opening of his 2005 hit ‘Nothing but green lights’.

The tempo doesn’t let up from here with the exception of a slower ballad, which struggles to hold the crowd’s attention and jars with the rest of the set. That said, Vek finishes the set with the spectacular, ‘Sherman (Animals In the Jungle)’ getting everyone moving and hoping it is not going to be another 3 years until they get to dance in front of him again.