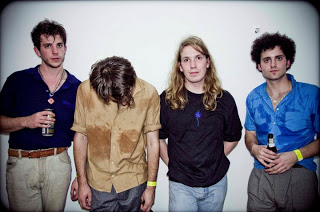 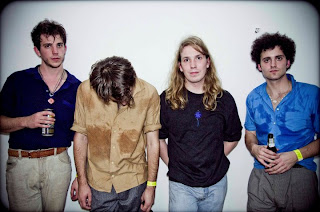 Remember that time you heard the first Arctic Monkeys demos? Or those now legendary ramshackled early Libertines shows? Those staples of recent British music history received similar hype and both successfully lived up to it, the fact that one went on to mega stardom and the other imploded in a glittering ball of drugs, inter-band break ins and prison time is irrelevant, although it will be interesting to see which path the Vaccines take.

Tonight’s show is a guest list only gig for fans that pre-ordered the bands eagerly awaited debut album on HMV.com, so we are expecting die hard fans who know every word to every song. What we actually get is fans that have heard the hype, but only the hype and come down to check out what the band are about. The album is only a week old and when a band is as new as The Vaccines the public have just not had chance to hear the music aside from the singles which have been on repeat on radio for the past few months.

The set starts tentatively, the first 4 or 5 songs falling by the way side, even though single ‘Post Break Up Sex’ is dropped second the atmosphere is just not there from the start. The second half of the set however is an absolute belter ‘Wreckin’ Bar (Ra, Ra, Ra)’, ‘If You Wanna’, ‘Blow it Up’, a cover of The Standells ‘Good Guys Don’t Wear White’ and closer ‘Norgaard’ bring the show to an exciting climax. Realistically the set should have been thought out better if you have songs which aren’t as strong, don’t just put them all at the start and hope people forget about it by the end.

Don’t get me wrong with this review, we like The Vaccines, they are easily the most exciting guitar pop band around, but at the moment they are the best of a bad bunch. Fusing 50’s surf pop with 70’s punk is a great combination that works well and they do have a knack of writing a very catchy tune. The previously mentioned ‘Wreckin’ Bar (Ra, Ra, Ra) is the highlight of the set and is easily as good as, if not better than anything Ramones ever wrote.

What is apparent tonight though is that The Vaccines album has amazing highs but also a lot of filler, They have been likened to other indie bands such as The Strokes and Kings Of Leon but if you look back at those two acts debut LP’s they have a wealth of tracks which could be played from start to finish at a gig without fans waiting for the hits before jumping around.

The Barfly is exactly the size of venue Vaccines should be playing, they simply do not yet have enough of the songs that warrant anything bigger. Maybe that’s just me getting old however? Go and see them and make up your own mind, they will undoubtedly be headlining some megadrome near you soon.