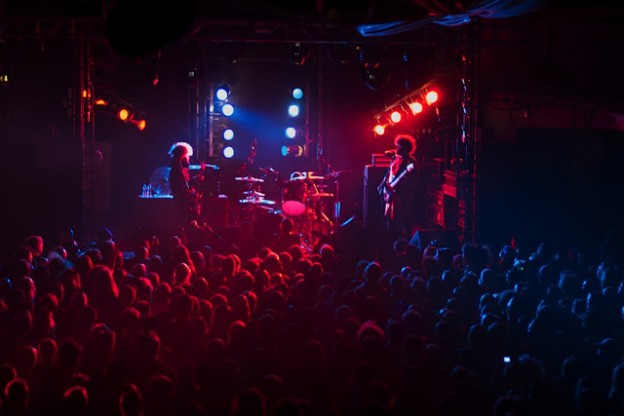 If you kick an oil drum down a set of iron stairs, throw bits of pavement into an abandoned mine shaft and drop a belt-sander on a large rodent, you will be somewhere close to the brutal sonic assault that is The Melvins.

Over the past decade The Melvins have moved on somewhat from their post Atlantic Record days. A Senile Animal is a milestone of their career, which started way back in the early 1980s. Their decision to include a second drummer, Coady Willis, and massive beardy bass man, Jared Warren, brought an energy and craft to their music that had been lacking since early nineties staples such as Houdini and Stoner Witch. They have released two more albums with this line up, most current being 2010’s The Bride Screamed Murder.

It was great to see tracks like The Talking Horse, Kicking Machine and History of Bad Men in the same set as old favourites Copache, At the Stake and Queen. Full of sharp, jarring rhythms and harsh doomy guitars it is always a joy to watch a band that look like they are on top of their game. Vocal harmonies, timing and tempo changes were all spot on and note perfect, an impressive skill considering that this is a genre of music that is renowned for being chaotic, raw and generally played by musicians who have spent a week in a garage with some Sabbath records, Special Brew and a massive bag of medicinal herbs.

If you watch T4 or have a John Lewis store card, don’t listen to this band. You will not like it. Whereas if you are socially inept, hairy, like to sweat and generally find yourself being angry at most situations and objects, it may well be worth a listen. Long live The Melvins