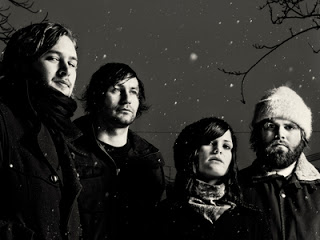 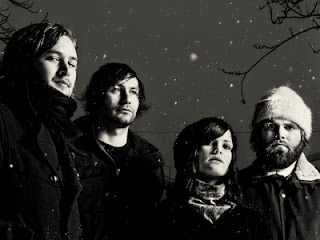 2011’s ‘Decoy Decay’ was well received and with the calibre this band has its no surprise. Made up from parts of Casiokids, Stereo 21, Young Dreams and Low Frequency In Stereo 2012’s self titled record was hotly anticipated. Tonight they play a set made up predominantly new songs including singles ‘Tune Your Mind’ and ‘Raising Flags’ with a few of the old favourites like ‘Talks Like A Weed King’.

At first glance they seem to have taken a slightly more melodic direction with the new songs but as the set progresses the usual onslaught of aural explosion that is a Megaphonic Thrift live set incurs. Bodies are tossed around the stage and guitars screech into a wall of sound that we have come to know and love from this band – yes they are incredibly noisy but controlling this level of reckless abandon and making it into something beautiful and well balanced is a real craft. What helps is that underneath this attack of chaotic noise are melodies and clever structures that can both calm and explode when necessary. The vocals of Richard Myklebust and Linn Frøkedal both blend and compliment perfectly giving a more relaxed feel to the riotous and turbulent music they are creating.

The set closes with guitarist Njål Clementsen hooking his instrument over the ceiling lighting rig allowing an assault of feedback to wash over the audience. We leave with ears ringing, safe in the knowledge that this band haven’t hit that awkward ‘second album syndrome’ and are still rocking as hard as ever. The Megaphonic Thrift are not ground breaking, but they are a fantastic example of noise-rock. If you are a fan of Sonic Youth, A Place to Bury Strangers and all those other bands that made this genre great then check these guys out; they are certainly worth more than a listen.