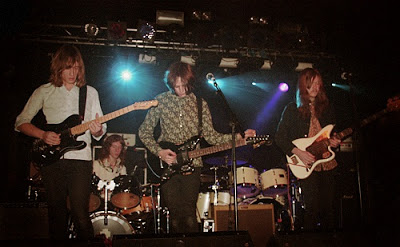 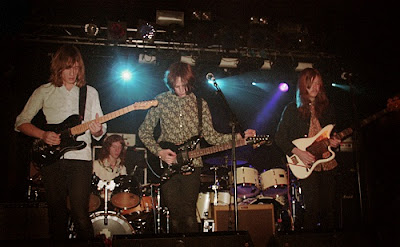 On stage as we walked through the doors were one of the most exciting bands we’ve seen all year, a band we travelled to Manchester to see and awarded them with our Band of the Month feature, this band is called TOY. In all honesty they are not very dissimilar to The Horrors, maybe it’s in the genes (one of TOY is apparently related to one of the Horrors), but the hypnotic, swarming, monstrous sound that soars above your head is one that is truly mind blowing. They make their epic 8 minute tracks feel like they should never end and put everything into it. It was magnificent hearing the singles ‘Left Myself Behind’ and ‘Clock Chime’ now that we have become more familiar with the two tracks. A brilliant and exciting band with a monumental sound, 2012 looks good for TOY.

Before The Horrors came on we hear through the grapevine that Farris didn’t show for sound check and once he arrived an hour before doors, he demanded a wheel chair…this may have been exaggerated a little, but added to the rock’n’roll edge of a band that at the moment are at the forefront of our attention. The Horrors are at both ends of the press these days; on one hand they have produced an epic third album, which topped our album chart of 2011 whilst on the other hand they have also been criticized for cancelling shows due to illness or TV shows; you may have seen the commotion on facebook. 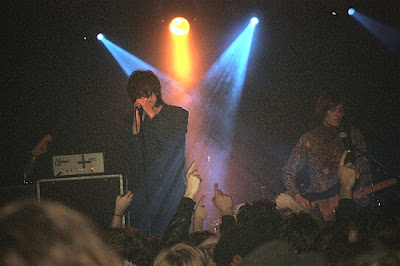 The Horrors took to the stage close to mid night and a stool was set out for Farris who apologised for the need to sit and wanted to come out tonight and put on a show and not have to cancel another gig. “It’s Christmas time motherfuckers!” he shouts before crashing into Changing The Rain’ making the place come alive in an instant. The feeling that everyone in the room is somehow connected emerges in ‘I Can See Through You’ and again ‘Moving Further Away’ provides this euphoric feeling that washes over the crowd. Probably one of the best times we’ve seen The Horrors, maybe it was the Christmas spirit, the psychedelic grunge or the 8 pints but it was just too damn good.