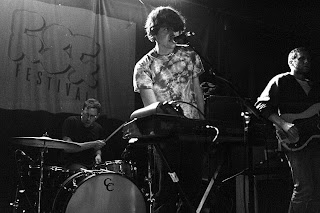 The band were given the unfortunate task of following Young Husband whos their Crystal Ep we have been listening too since its release last November. Their strange eerie dark noise with dream like quailties layered with guitar and synth over beautifully simple vocal melodies made them a joy to watch. So when THOAP took to the stage it was going to take something special to up the bar. The usually very reliable Hoxton Square Bar sound system didn’t do them any favours and the first two or three tracks were too quiet and failed to make impact however once the house engineers had got to grips with balancing their sound they managed to pull it together and finished a lot better than they started. 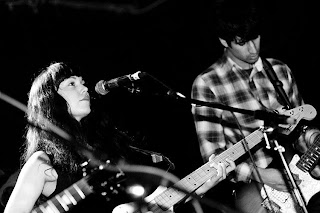 Again single Mallory was the stand out track, rich harmonies which brilliantly treading the line between well crafted pop song and Sonic Youth style noise. Guitarist Jerome Watson is a shoegaze legend in the making fighting with his axe to achieve some mesmerising sounds whilst hiding behind a wall of hair.

If you’ve not seen them live or heard their records before then they are certainly worth a listen, even with tonight’s problems they are by no way a disappointment. It seems even the best have an off night and if you see them as much as we do then it was bound to happen sooner or later, we’ll still be there for the next one though.