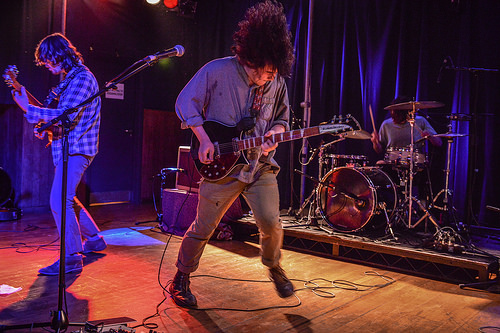 As blues tinged psych-rock goes, you’re probably not goanna get better than Philadelphia’s The Districts at the moment. You can have your Kings of Leon. Alabama Shakes are more soulful, but they’re ploughing a more personal furrow. The Scala, sweet little venue as it is, could barely contain a heaving crowd that gave off waves of ‘Entertain us. It’s Tuesday’.

You might think they’re mild mannered (not a lot of banter and interaction with the crowd), but as they quietly ambled on to the stage, opening with Chlorine, the band proceeded to produce a beguiling mix of bluesy riffs, lead singer Rob Grote’s honeyed voice sometimes get lost in a racket and MBV/Spiritualized style droning and walls of noise. It’s an interesting mix, and you feel a real strength in the band. However, the off-key moments that are as stop-start as clapped out banger on the M25, might leave you feeling slightly frustrated.

They’re slow burners, like a candle in a blackout, but manage to keep the crowd captivated playing a setlist that includes Peaches, Funeral Bed and current radio fave, 4th and Roebling, where Grote’s phrasing sounds pleasantly, like Julian C from The Strokes, a solidly upbeat number.