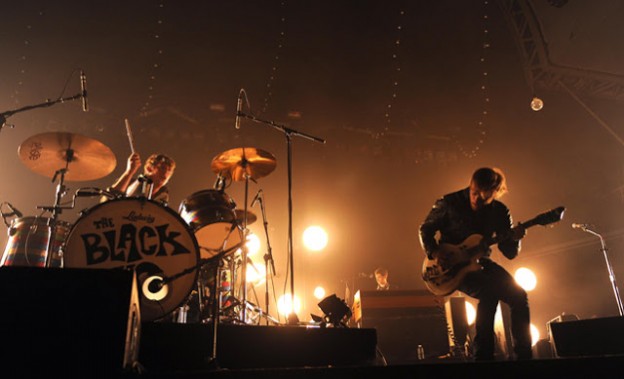 The first few flakes of snow are beginning to fall outside the prestigious Alexandra palace in North London as we head inside early to catch tonight’s support act ‘Band Of Skulls’. The Southampton alt-rock three piece go down well with the crowd, their big sound filling the gaps left by the still entering masses in the main hall. As things start to fill up we nod along in enjoyment of B.O.S.’s blend of blues rock, coming across like chilled out White Stripes meets Black Rebel Motorcycle Club. The audience are treated to tracks from 2009’s debut record ‘Baby Darling Doll Face Honey’ as well as newer songs taken from 2011’s ‘Sweet Sour’ including the awesome ‘The Devil Takes Care Of His Own’. This is the second time we’ve seen this band and they seem like a more confident and accomplished act growing into their sound, picking up fans along the way, which is not unlike tonight’s headline act.

The rise of Ohio’s The Black Keys has been a slow one, just when did this band get so big? Releasing their debut albums ‘The Big Come Up’ way back in 2001 the road to 2011’s ‘El Camino’ has been completely organic – made up of no less than seven LP’s, hundreds of shows and word of mouth. The album they really found fame on was 2010’s crossover hit record ‘Brothers’  an album they draw much from this evening. They open the show with ‘Howlin’ For You’ followed by ‘Next Girl’ both from ‘Brothers’ before moving into the catchy ‘Run Right Back’ from the new album ‘El Camino’.

Guitarist and Signer Dan Auerbach and Drummer Patrick Carney are backed up by just two musicians on bass and keys, keeping things nice and simple and they way The Black Keys are intended to be heard. For a small section during the middle of the set they take on four of the earlier more blusier songs on their own which gets a huge response from the crowd, two lasers behind the band project their silhouettes onto the huge opposite side walls of the historic venue, the stage is kept similarly sparse with just a few oversized light bulbs casting their orange glow on the rest of the band as they return.

The highlight of the evening comes in the form of new single ‘Gold On The Ceiling’ its polished rock/pop tones sending the crowd wild with its sing-along chorus and guitar line. The band close an hour and a half after starting with ‘Lonely Boy’, the first track to have been released from ‘El Camino’, giving huge thanks to the fans which came out to see them and the reception they have received before returning for a full three song encoure including ‘Everlasting Light’ and ‘Long Gone’.

As we leave we are greeted by three or four inches of snow in the grounds of the palace now knowing exactly how this band got so big, their songs. No longer a cult concern but the headliners of not one but three sold out nights at one of London’s biggest venues. Ten years into their career The Black Keys are as good as they have ever been and matter ten times more.