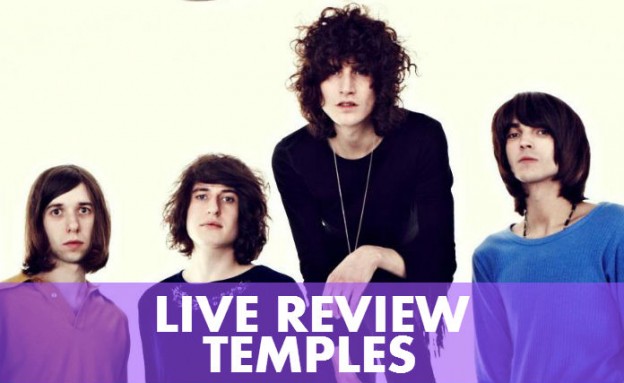 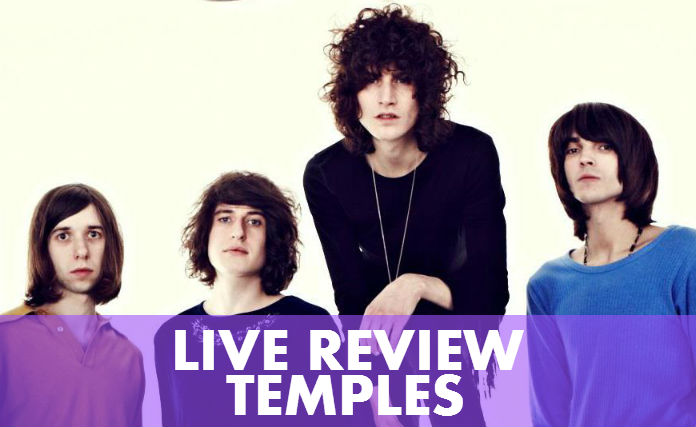 And then one fine day you find yourself carefully listening to that band’s recently released debut album and, shockingly as it may come, you realise this fuss here has a reason to exist. TEMPLES are that kind of band.

Therefore, it is with prickling beatitude you lead yourself to Shepherd’s Bush Empire on a mid-March Saturday night, eager to earn access to that uncanny land you know is waiting behind the doors and forget the turmoil of your messy life for at least one night only. When you set foot into the theatre the air is buzzing with such a level of expectancy you can actually taste it.

It feels like people have been summoned here by a greater force, all of them yearning for something metaphysical to happen. Temples have yet to make their stage appearance, still their impalpable presence is everywhere.

Opening acts DARK BELLS and Childhood succeed in chiseling the surrounding ambiance into the sort of hazy dream you never want to wake up from and when the headliners finally come on stage their audience is unknowingly ready to embark itself on whichever journey they will lead them on.

‘Colours To Life’ frothing intro soothingly fills the atmosphere, casting a spell on the entire crowd and makes us gasp. Watching the Kettering quartet flicking through their acid-infused repertoire it’s like sitting on the edge of reason, hoping to be dragged down to insanity.

Medallions, glinting blouses, surreal hair, aesthetically Temples have it all to accomplish this treacherous task, differing from their psychedelic Australian counterpart Tame Impala in terms of soul-grabbing profundity.

What we are called to witness here is a teasing incantation, effortlessly led by James Bagshaw’s entrancing vocals and his splendid guitar playing, nonchalantly switching from a 12-string, a 6-string and a semi-acoustic. The fact this is a relatively small band with just one album released seems almost impossible to believe when you see them performing with such majestic cleverness, giving you the feeling they come from an ancient time and place, speaking directly to your inner self.

‘Sun Structures’ follows suit with its train of hallucinogenic charm, but it’s with ‘A Question Isn’t Answered’ and b-side ‘Ankh’ that we reach the magnifying peak. Self-produced by Bagshaw himself in his home studio in Kettering, ‘Sun Structures’ is an album truly gleaming at its best when played live. Every song chases the previous one in a lullaby-like sort of way, forging a mistifying path of lysergic-soaked purity.

The grand finale comes too soon with singles ‘Keep In The Dark’ and ‘Shelter Song’ commanding everybody to lose what is left of their senses. The foursome then abandons the stage in a kaleidoscopic splendor of lights and harmonies, just to reappear soon after for their encore with the much-anticipated ‘Mesmerise’.

Never has a song title been more apt than this to describe the exact level of rapture that has everyone spellbound. They then gather together for a group hug, relishing in joy with their crowd. Before you can even realise it, the music is gone and we’re back to reality. Too much, too soon sadly. When you reverse yourself onto the street, you can’t help but feel fortified. Temples are beautiful and so is the world.

On March 27th they’ll be playing London’s Brixton Academy alongside Interpol, Royal Blood and Circa Waves for the NME Awards Tour. A word of advice: do not miss them. And let yourself be mesmerised.